I hope you’re all having an excellent weekend.

Just a quick post to have a place to share stuff. Please feel free to do the same!

How Democrats Can Win In 2018: Ignore The Party’s Serial Losers– In Other Words, The Establishment

The piece introduces three candidates who seem to be ready to battle using their own approaches.

Derek Cressman is running for a state Senate seat in California. He penned a powerful OpEd for the Sacramento Bee on Thursday about how Democrats can win in 2018 and 2020, a point of view that the establishment– whether Jeb Bush or Nancy Pelosi– will never understand. “If the past year has taught us anything,” he wrote, “it’s that too many voters have lost faith in key civic institutions such as the news media and political parties. If we are going to rebuild public trust, legislators need to become more partisan.”

You might be surprised to hear someone like me, who has spent most of his career           with nonpartisan good government groups, advocating for more partisanship.               But that’s precisely what America needs right now.

I think most of use are painfully aware of the way party endorsements often seem to go to those seen as good fundraisers rather than those with good platforms.

Sam Jammal, the progressive running for the suddenly open Orange County congressional seat that Ed Royce is abandoning (CA-39), told me this morning that “We win if we actually focus on what people are concerned about– housing affordability, out of pocket health care costs, student debt and whether they can get a raise. We lose when we obsess over Trump and don’t stand for anything. This isn’t science– Democrats need to be for something. But most importantly, we win when we are on the ground and in the community. We need to elect people who reflect their districts and will fight for their districts.”

That all sounds very reasonable to me Sam! Here’s a pic of Sam, lots of images to choose from, seems like an Obama supporter, climate groups like him, a lot of different colors though, lol, seriously, google him. I’m seeing red/white/blue, purple/red, blue/white, hmmm, but here’s one from his site.

The fly in the soup in that race was the fact that a liberal Independent, John Hartman ended up slicing off over 7% of the total vote. I don’t know why Hartman decided to jump in, but his views seem to land mostly on Gill’s end of the political spectrum, so certainly his presence may have swung that race to the Republican, Rodney Davis, who by at least this account sounds like quite the smooth operator, btw.

The reason this story is familiar though, other than the fact that the Democratic party had initially supported the moderate candidate over the progressive candidate, is that after that narrow loss in 2012, it appears that the party is still trying to move right. In other words, stick to the same often-losing formula.

“The situation here in IL-13 is ridiculous. My progressive message of single-payer healthcare came within 0.3% of victory in the 2012 general election (my message actually WON by 7 points, but a liberal independent took 7.3% and split the vote just enough to allow the Republican to become an ‘accidental Congressman’). Since then, the DCCC has insisted on running conservative candidates with bland messages, and they’ve been slaughtered by 18-20 points. It’s amazing that my lifelong party can’t get behind me, and instead persists with a message that loses by 50-60 TIMES my margin of defeat. It appears as though they don’t want a single-payer pushing practicing doctor anywhere near the halls of Congress.

Gill is still battling for support from his party. He’s been doing that for awhile actually, since 2004. This will be the fifth time that Gill runs. Phew, talk about persistance! Here’s Gill. 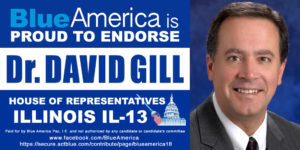 I’m glad to see passionate candidates who are insisting on being progressive. I hope to share profiles on some lady warriors next.

The rollback prompts broad opposition from former officials from both political parties.

I love birds. It drives me crazy how we take them for granted!

The Trump administration’s environmental rollbacks have sparked a lot of outrage. But one recent action by the Interior Department drew unprecedented protest from a bipartisan group of top officials who go all the way back to the Nixon administration: a new legal opinion that attempts to legalize the unintentional killing of most migratory birds.

Under the new interpretation, the Migratory Bird Treaty Act forbids only intentional killing – such as hunting or killing birds to get their feathers – without a permit. The administration will no longer apply the act to industries that inadvertently kill a lot of birds through oil drilling, wind power and communications towers. Critics fear that these industries might now end the bird-friendly practices that save large numbers of birds.

If you love birds, you’ll love this. Enjoy.
http://www.dnr.state.mn.us/mcvmagazine/bird_songs_interactive/index.html

Parry joined the AP in 1974 and went on to work in the Washington bureau, where he covered the Iran-Contra scandal as it rocked the Reagan administration. His work on the scandal also brought a George Polk Award in 1984.

After leaving the AP in 1987, Parry worked for Newsweek until 1990 and then became an investigative reporter for the PBS series “Frontline.”

In 1995, frustrated with what he saw as dwindling venues for serious investigative reporting, Parry founded the Consortium for Independent Journalism. Its website, Consortiumnews.com, sought to provide a home for such reporting in the early days of the internet, though it struggled financially and relied on contributions.

An Apology and Explanation

From Editor Robert Parry: For readers who have come to see Consortiumnews as a daily news source, I would like to extend my personal apology for our spotty production in recent days. On Christmas Eve, I suffered a stroke that has affected my eyesight (especially my reading and thus my writing) although apparently not much else. The doctors have also been working to figure out exactly what happened since I have never had high blood pressure, I never smoked, and my recent physical found nothing out of the ordinary. Perhaps my personal slogan that “every day’s a work day” had something to do with this.

Perhaps, too, the unrelenting ugliness that has become Official Washington and national journalism was a factor.

Barack Obama’s election in 2008 was another turning point as Republicans again challenged his legitimacy with bogus claims about his “Kenyan birth,” a racist slur popularized by “reality” TV star Donald Trump. Facts and logic no longer mattered. It was a case of using whatever you had to diminish and destroy your opponent.

We saw similar patterns with the U.S. government’s propaganda agencies developing themes to demonize foreign adversaries and then to smear Americans who questioned the facts or challenged the exaggerations as “apologists.” This approach was embraced not only by Republicans (think of President George W. Bush distorting the reality in Iraq in 2003 to justify the invasion of that country under false pretenses) but also by Democrats who pushed dubious or downright false depictions of the conflict in Syria (including blaming the Syrian government for chemical weapons attacks despite strong evidence that the events were staged by Al Qaeda and other militants who had become the tip of the spear in the neocon/liberal interventionist goal of removing the Assad dynasty and installing a new regime more acceptable to the West and to Israel.

It takes energy and fortitude to swim against the current.

T and R, mags!! 🙂 So sorry about confusing you and la58 in the postings this weekend. It’s terrific the way TPW has matured with all of you pitching in and helping LD with these great weekend posts. Still miss bebimbob’s science ones. 🙁

You have nothing to apologize for orlbucfan!

Thank you for your “T and R”! I love seeing those, especially directed at me. 🙂