For Steve King, the Number of People Who Want Him Gone Could Be a Blessing
Now his Iowa constituents will decide if it’s time to bring down the curtain on the nine-term congressman, who long stoked the immigration wars with racist remarks until he was disciplined last year in the House.

The problem for mainstream Republicans who would like to retire Mr. King in a June 2 party primary is that, with four challengers in the race, all sensing an opportunity and aggressively campaigning, the anti-King vote will be split four ways.

“Not to be Captain Obvious, but four people in the race always helps the incumbent,” said Rick Bertrand, who challenged Mr. King in the Republican primary in 2016 but is not running this year. “If this was a mano a mano race, King would be in trouble right now.”

In January 2019, Republican leaders stripped Mr. King of his House committee assignments after he suggested that white nationalism was not offensive. Mitch McConnell, the Senate majority leader, urged Mr. King to “find another line of work.” Mr. King defiantly remained.

His penchant for incurring the wrath of party leaders has marked his campaign. Over the weekend he raised the stakes by claiming to have recorded a phone call with Representative Kevin McCarthy of California, the House minority leader, and contradicted Mr. McCarthy’s public statements.

Mr. King had told Iowans at a debate on May 11 that Mr. McCarthy had promised him “exoneration” and pledged to recommend “to put all of my committees back with all of my seniority.”

There was just one problem. Mr. McCarthy denied any such thing. “Congressman King’s comments cannot be exonerated, and I never said that,” he told reporters four days later. Should Mr. King win re-election, his committee assignments will be reviewed at the start of the next Congress by the Republican Steering Committee, “just like every single member,” Mr. McCarthy said. “Talking to members on the steering committee, I think he’d get the same answer that he got before.”

But on Saturday, during a candidate forum, Mr. King effectively called Mr. McCarthy untruthful. Brandishing papers that he said were transcripts of a phone call he had recorded with Mr. McCarthy, he insisted that the Republican leader told him in April he would lobby for the return of his committee assignments. “All Kevin McCarthy really needs to do is do what he said,” Mr. King said.

A spokesman for Mr. McCarthy did not respond to a request for comment.

Even though Mr. King’s long history of inflammatory comments about immigration is not far removed from President Trump’s own rhetoric, Republicans are worried that with Mr. King on the ballot in November, a safe seat for the party could fall to Democrats.

“J.D. Scholten is waiting,” one of Mr. King’s challengers, Jeremy Taylor, said at a debate last week, referring to Mr. King’s general election opponent from 2018, who is running unopposed in the Democratic primary. “He cannot be the representative in this district.”

Mr. Scholten came within three percentage points of flipping the seat, in a Northwest Iowa district where Mr. Trump won by nearly 20 points in 2016. A rematch would bring a flood of outside money to Mr. Scholten, a former minor league baseball player, but his chances would be considerably lower if he faces one of Mr. King’s primary challengers.

“A generic Republican should win convincingly,” said Dane Nealson, a Republican City Council member in Nevada, Iowa, in Mr. King’s district. “It speaks to King’s ineffectiveness as a congressman and embarrassment to our state, more than anything, that it was that close last time.”

If neither Mr. King nor any of his four challengers receives at least 35 percent of the vote on June 2, the nominee will be picked at a district convention. Convention attendees are drawn from the party’s most committed activists, and Mr. King is thought to have an advantage under that scenario.

Mr. King’s closest rival, Randy Feenstra, has been endorsed by mainstream Republican-leaning groups including the U.S. Chamber of Commerce and the National Right to Life Committee. A state senator, Mr. Feenstra has raised far more money than Mr. King, reporting $415,000 in cash on hand in the latest reporting period, compared to Mr. King’s $26,000. An internal poll that Mr. Feenstra released on May 11 showed Mr. King leading the field with 39 percent, closely trailed by Mr. Feenstra at 36 percent, a gap within the margin of error.

More tweets, videos, stories in the comments section. See you there! 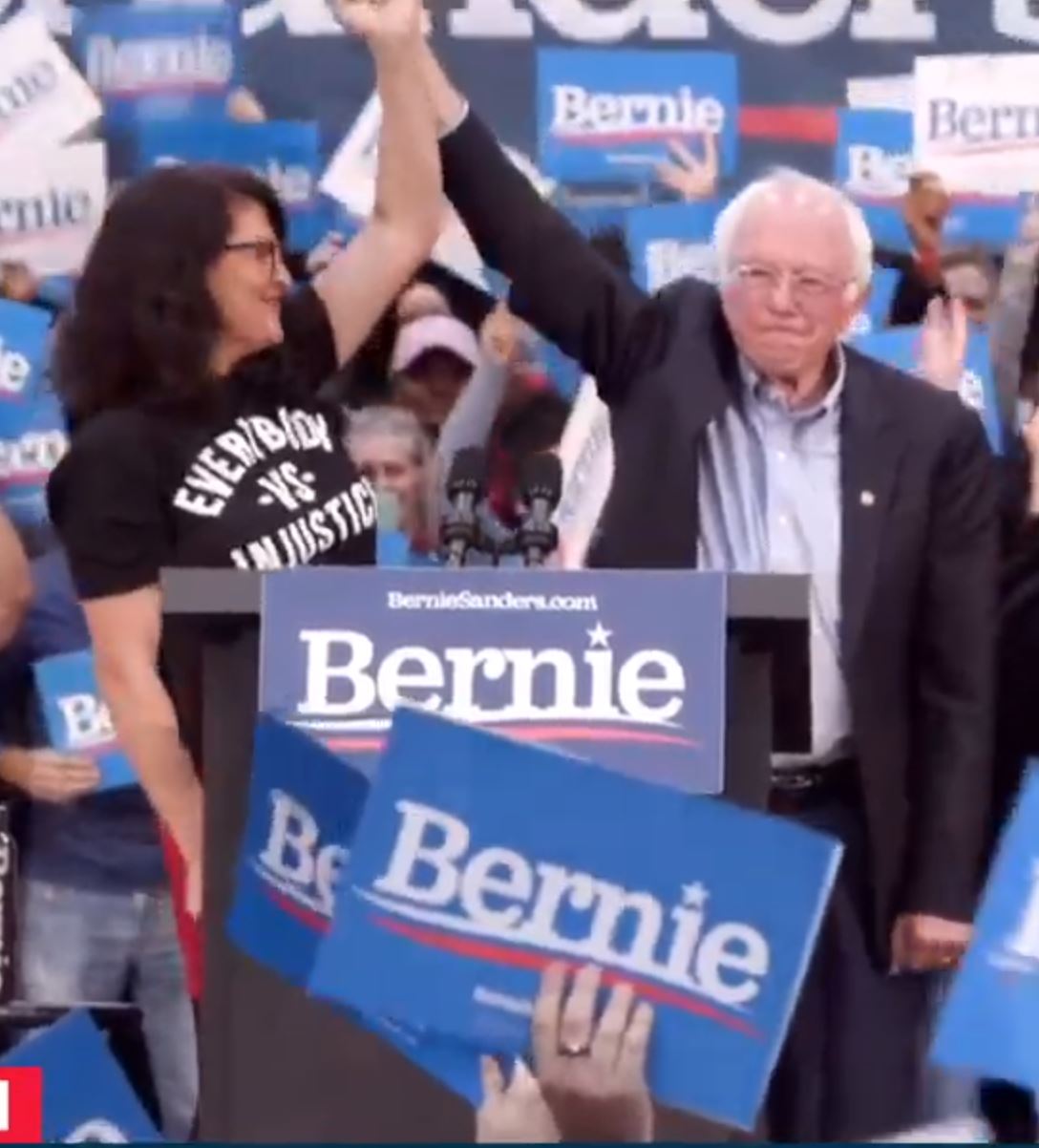 Sanders’ bid for the Democratic presidential nomination sagged in the aftermath of heart surgery that left him sidelined for two weeks. But after a strong performance on the debate stage last week and the biggest campaign event of the Democratic primary season with 25,000 fans, Sanders’ polls have bumped up.

On Tuesday, Emerson College published a nationwide poll that had Sanders moving back into second place with 25%, yo-yoing with Warren who moved back into third position with 21%. Biden still leads the pack, but by a slim margin, at 27%.

Despite that uptick, Sanders has lost ground with primary voters who are gravitating to Warren, and the Vermont senator will need to redouble his efforts in order to win over former supporters, according to Brendan Kane, a research assistant for the Emerson College survey.

“To create a winning coalition in the primary, Sanders will need to win back more of the voters who supported him in 2016 from Warren than he is currently receiving,” Kane said in a statement.

In a CNN poll released on Wednesday, Sanders and Warren are neck and neck for second place. Warren is at 19% and Sanders is just behind with 16%. Both progressive candidates are well behind Biden, who at 34% is now at his strongest showing in CNN polling since he announced his candidacy for president in April.

Sanders’ uptick in the polls comes after he received endorsements from Democratic Reps. Alexandria Ocasio-Cortez, D-N.Y., and Ilhan Omar, D-Minn., who are part of the progressive Congressional group nicknamed “The Squad.”

After Ocasio-Cortez joined Sanders in Queens, New York, for his rally, Omar is scheduled to attend a Nov. 3 Sanders rally in Minneapolis, Minnesota. Another member of the group, Rep. Rashida Tlaib, D-Mich., is expected to publicly endorse Sanders for president during a rally in Detroit, Michigan, Sunday evening.

Riding this momentum, the Sanders campaign unveiled a plan to legalize marijuana in the first 100 days in office.

Sanders outlined his intention to make cannabis legal in August — when he announced his criminal justice reform plan. The formal announcement last week coincided with President Donald Trump’s speech at a justice forum in the early primary state of South Carolina.

While Sanders has stabilized in national polls, he is behind other top candidates in Iowa.

In an Iowa State University survey of likely Iowa Caucus attendees published Thursday, Warren moved into first place at 28%, with South Bend Mayor Pete Buttigieg second at 20%, and Sanders coming in third at 18%. Biden, meanwhile, who fell to 12% in the poll, slipped to fourth place.

On the same day the Iowa poll was released, news broke that Sanders had won the endorsement of Stacey Walker, a rising political star in Iowa who boasts an impressive organizing apparatus, according to Politico.

Walker told Politico he backed Sanders because he believes the nation needs a “bold leader,” and “as a black man living in America, I’ve had enough of politicians telling me we have to scale back our dreams and ambitions.”

Despite being down in the polls, the Sanders team is confident it will win Iowa and earn the much coveted momentum it needs heading into New Hampshire.

“We have the biggest volunteer base in the state. We’re making massive investments on TV and digital. And we’re not going to stop until we win,” said Bill Neidhardt, deputy Iowa director for the campaign, on Twitter Friday.

White, who was born in Detroit and graduated from Cass Technical High School in 1993, will perform a set before speeches from Sanders and Tlaib. Detroit-area activists and leaders will join Sanders and Tlaib to discuss racial, environmental, and economic justice, as well as the impact of corporate power on working Americans.

In 2016, White expressed his distaste for President Donald Trump when his Detroit-founded record company, Third Man Records, released T-shirts with the words “Icky Trump” on the front. The language on the T-shirts was a play on the White Stripes’ 2007 album and song titled “Icky Thump.”

The rally will begin at 5 p.m. on Sunday in the Arena Gymnasium of Cass Technical High School, which is located at 2501 Second Ave. in Detroit. Doors open at 3:30 p.m., and the event is free and open to the public

This crowd is fired up, energy all the way up!

More news, tweets, videos in the comments section. Will post a link to the rally closer to 4 CT. Join us!

It’s 55 in SF and mainly sunny today near Ft Mason (near Fisherman’s Wharf), where the rally is being held at 1:30 PDT.

You all ready for thousands of groovy, gentle people with flowers in their hair? 👉🏼 @BernieSanders in Great Meadow Park at Fort Mason 👈🏼
Doors open at 11 am – Starts at 12:30 pm Pacific Time#BernieInSF #BernieInSanFrancisco #Bernie2020
This one's for you, @RoseAnnDeMoro. 🤗 pic.twitter.com/BwCLMTpr4d

I live down the street from Fort Mason, where the Bernie Sanders rally is taking place today. Walking home from Safeway and saw this… the line wraps around the park. @abc7newsbayarea #abc7now pic.twitter.com/1sVMD9tnaQ

Livestream up! Chat away in the comments section!

Tonight is Bernie Sanders first rally since he announced his 2020 candidacy. And it’s PI day:

When Bernie’s team gets it going, it should stream here:

Our job: defeat Trump and create a government that works for all. Join us live in South Carolina! https://t.co/jFsgmMWa1A

Meantime, chat away with tweets, videos, articles for our evening thread.

Senate Votes to End US Support for War in Yemen, Led by Senators Sanders, Lee, and Murphy

Lawmakers have never before invoked the decades-old War Powers Resolution to stop a foreign conflict, but they are poised to do just that in the bid to cut off U.S. support for a war that has triggered a humanitarian catastrophe.

The vote puts Congress on a collision course with Trump, who has already threatened to veto the resolution, which the White House says raises “serious constitutional concerns.”

The measure was co-sponsored by Sen. Bernie Sanders, I-Vt., and Sen. Mike Lee, R- Utah. Next, it will move to the Democratic-controlled House, where it is expected to pass.

The resolution passed by a vote of 54 to 46, with seven Republicans breaking with Trump to back the resolution: Sens. Susan Collins of Maine, Steve Daines of Montana, Mike Lee of Utah, Jerry Moran of Kansas, Lisa Murkowski of Alaska, Rand Paul of Kentucky and Todd Young of Indiana.

“The bottom line is that the United States should not be supporting a catastrophic war led by a despotic regime with an irresponsible foreign policy,” Sanders said on Wednesday from the Senate floor. He said a vote in favor of the measure would “begin the process of reclaiming our constitutional authority by ending United States involvement in a war that has not been authorized by Congress and is unconstitutional.”

In an historic vote, the Senate sent an important message: we will no longer support Saudi Arabia in causing the worst humanitarian disaster on the planet. Congress will reassert its constitutional authority on issues of war and end U.S. support for the war in Yemen. https://t.co/6l7s4L4aLE

Hop on! We're headed to the White House and there's room for everyone! 🚌 #Bernie2020 #Silvers4Sanders pic.twitter.com/AYPqW2UlFE