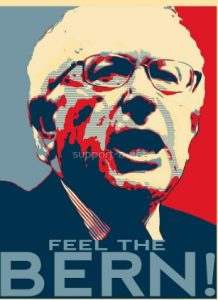 Two Weeks ago, I read an op-ed by Maureen Dowd, “Still Feeling the Bern. ” It’s a favorable interview and review of Ari Rabin-Havi about his book on working for Bernie Sanders as a staffer, later as “Earl’s” deputy campaign manager and close political adviser. The memoir is entitled The Fighting Soul: On the Road with Bernie Sanders.

Dowd supplies some good leads about the book, but I will include for brevity only this summation:

When Sanders met with Barack Obama at his Georgetown office in 2018 to tell him he was thinking about running for president again, Obama offered this advice: “Bernie, you are an Old Testament prophet — a moral voice for our party giving us guidance. Here is the thing, though. Prophets don’t get to be king. Kings have to make choices prophets don’t. Are you willing to make those choices?”

Rabin-Havt (whose brother, Raphi, worked with me at The Times for a spell) writes: “Obama continued, making the point that to win the Democratic nomination, Bernie would have to widen his appeal and convince the party to back him — which would mean being a different type of politician and a different type of candidate than he wanted to be. Bernie listened to Obama, but it was clear to me he never accepted that premise. He has a fundamental belief that he could lead an uncompromising movement that would challenge those who ran the Democratic Party while also leading that same institution, one he steadfastly refused to join.”

The author sums up with a trenchant point: Bernie may never see “the promised land,” but he did win.

“While Bernie Sanders will never be president, his two campaigns have transformed the Democratic Party and this country. Old orthodoxies about government spending and foreign policy have crumbled as a result of the unceasing efforts by an old socialist.”

I labeled this post part one for a good reason. Thanks to Dowd’s op-ed, I decided to buy a Kindle edition of the book and it arrived yesterday. I’m about 20% of the way through. It’s very relaxed in its prose, and candid at times about the frustrations in creating work arounds to make the trains run on time. Some of it has surprised me, such as learning that Bernie is a football fan. I thought he liked baseball and basketball, hereto alas, he likes football and roots for the New England Patriots. (The author is a Giants fan and finds the Pats annoying) I enjoy reading about Bernie’s proclivities and use of foul language when away from microphones. Dowd put it this way in her piece:

I relish hearing about what Rabin-Havt calls “Bernie’s natural impatience” with the frivolous — pretty much everything except the sweeping changes he wants in the country.

There are some happy moments with co-chairs of the campaign, such as Nina Turner’s great effort of personally adopting SC for one of the first primary states in campaigning for the senator. Rabin-Havt shared more of the strategy in the book, which political historians will appreciate. Much of it we knew from reports in the news and all of us who attended rallies, but Rabin-Havt reveals the thinking behind it.

I’m posting some videos and reviews in the comments. feel free to add your own. I’ll be reviving this later in the week.