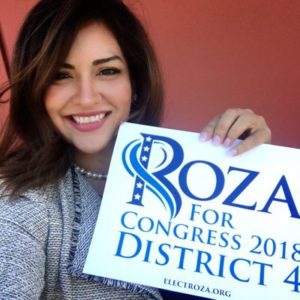 As a geoscientist, activist, and single mother, Roza Calderon knows that we need leaders who represent real people’s needs over party interests. That means combating climate change, fighting for Medicare for All, and building an inclusive economy – not because it’s popular, because it’s the right thing to do for California’s 4th District.

Raised in the “All-American City” of Lincoln, CA, she planted her roots and is raising her family in Congressional District 4. Roza values hard work and understands the importance of restoring the faith in the American Dream. She is dedicated to standing up for working, blue-collar families to secure their livelihoods. The American Dream is rooted in the ideas that every child deserves equal opportunity to excel and that individuals who work hard should have a fair shot to get ahead, no matter where they started in life.

​We are a nation united by civic values. These beliefs help build our national character and our economy. When we provide equal opportunity for all, our economy does better for everyone. Roza will fight for every Californian and American to make sure the American Dream is there for the next generation and many more to come.

What Roza Will Fight For:

Fight for American families
*Get money out of politics to ensure representation – your vote should count!
◦Fight for equity in our K-12 system – it’s our nation’s foundation
◦Support working families & fight to increase our vanishing middle class to Eliminate regulations that favor of big business over small businesses
◦Cut taxes for middle and lower income Americans
◦Defend our natural resources & protect our environment – stop mismanagement that risks lives o Fight for net neutrality & end the digital divide

Human Rights◦
◦Be a champion for LBGTQ, BLM, Women’s Rights, and every person who is disenfranchised
◦Defend free speech and expression
◦Combat homelessness
◦Promote diplomacy not war