Evening birdies…lots riding on a strong, Bernin’ performance against the media.

From my local newspaper, some thoughts about the two candidates and what they need to do for combat:

JOE BIDEN
Since he won a majority of the South Carolina vote, Biden has been on a roll, and he now enjoys a lead of more than 150 delegates over Bernie Sanders. On paper, the majority of the remaining states and territories better resemble the places where he has done well than those few where he has finished poorly. This debate is perhaps the only thing standing between him and the Democratic nomination.

However, in prior debates and in numerous campaign events, he has lost his train of thought, fumbled for words or lost his cool, seeming befuddled sometimes and startlingly cantankerous at others. In the first one-on-one debate, Biden must avoid alienating Sanders’ many diehard fans, whom he will need on his side in November. At least as important is to prove that he can be cool and coherent, if not eloquent, in the debate format in which the Democratic nominee will eventually clash with President Trump.

BERNIE SANDERS
To derail the Biden express, Sanders must plant strong doubts in the minds of those Democrats who have not yet voted about Biden’s ability to win the 2020 general election.

Freed from the chaos of a multi-candidate mix-up, he can accentuate their policy differences. But if he really wants to win, he probably has to muster all of his debating skill to get Biden off balance.

In 2016, Sanders took Hillary Clinton’s email destruction off the table in the primary season, to her relief and temporary advantage.

If he fights Biden with one hand behind his back, he’ll be watching the November campaign from Vermont.

Bernie already has his gloves on:

It's great that Joe Biden is now supporting a position that was in the Democratic platform four years ago.

Now we must make all public universities, colleges and trade schools tuition-free for all, cancel all student debt, and fund it with a small tax on Wall Street speculation. https://t.co/DQiCPDsqs2


Bar is open; dinner is on your own. This serves as an open thread. Debate starts at 8 ET/7 CT/6 MT/ 5 PT, and is on CNN.com. According to The Verge, these are the options to watch for free:

The debate will air on CNN, CNN en Español, CNN International, and Univision. If you don’t have a cable or satellite login, you can watch it for free without paid credentials on CNN.com or its mobile app for iOS and Android.

Alternatively, you can tune in for free on your TV via the CNNgo app, which is available for Apple TV, Roku, Amazon Fire TV, Chromecast, and Android TV.

The magnificent seven–no, I wouldn’t say that. But we still have a real progressive who wants to help the US in a universal way and a liberal who will try to work within the Democratic Party system. There there are 3 moderates and a social libertarian. Quite the train.

The last DNC Debate, which is being held in Los Angeles, may turn out to be good timing for the media, but will potential voters, especially indies, tune in after having to listen to the Establishment media talk about the proceedings and outcome of the articles of impeachment (surprise, Trump got impeached). Will the moderators attempt to ask more questions about foreign policy besides the UK election? One can surmise Joe Biden and/or Bernie Sanders will get asked about left vs center right politics from it. I hope Senator Sanders will clarify that while he and Jeremy Corbyn share many views, the main difference was subjecting the voters to a second referendum about Brexit. For good or for ill, Labour supporters trust that Boris Johnson will get it done.

I heard on CNN that over 50% of voters haven’t made up their minds yet.

Will Democrats tear up the script for their final debate of 2019?

Like a recurring series of TV reruns, the debates have played out with a familiar ensemble, a well-thumbed script and a plot that has varied little from one episode to the next: Will Joe Biden implode before our eyes? Will some little-known candidate remake the contest in a single stroke? Will the stage collapse from the weight of all that political ambition?

“People have gotten more exposure, voters have gotten to know their names and hear their stories and take a bit of their measure,” said Mary Anne Marsh, a Democratic strategist who has stayed neutral in the party’s nominating fight. “But in the end the debates have not in any way upended the top tier, which remains a wildly consistent race between four people.”

Though previous debates haven’t altered the contest in a big way — some of the most dramatic moments were staged by candidates, like California Sen. Kamala Harris, who either quit the race or sank into irrelevance — they have not been without consequence.

Sanders, 78, allayed concerns about his health with a robust appearance two weeks after suffering a heart attack. Buttigieg proved himself more than a political flavor of the month by delivering a series of strong and substantive performances.

Warren was forced to flesh out her position on healthcare, one of the major issues in the campaign, after facing repeated prodding under the TV lights. She released a “Medicare for all” proposal that was criticized by some as unworkable and too costly; a follow-up plan was criticized by others as too timid. Since then, Warren’s upward momentum has stalled and her support has even slipped in some early-state polls.

Most significantly, the debates have served to cull the sprawling field, the largest any party has put forth in modern times.

As the benchmarks for qualification grew steeper, winning a place onstage sorted the contestants between those seen as having a shot at the nomination, however meager, and those struggling for attention from voters, donors and the political news media.

“They created sort of a threshold for viability which was very premature,” said Colorado Sen. Michael Bennet, who has been excluded from all but two debates and believes the race is far less settled than opinion surveys suggest.

(An exception has been Steyer, whose spending — north of $50 million and counting — bought the former hedge fund executive a place in the debates by boosting his name recognition and elevating his support in qualifying polls. The race’s other free-spending billionaire, former New York City Mayor Michael R. Bloomberg, hasn’t bothered trying to meet the debate criteria, self-funding his campaign rather than building the requisite base of small donors.)

The debate is being sponsored by PBS/Politico. In addition to airing on local PBS stations, the debate will air exclusively on CNN, CNN International, CNN en Español, and stream on CNN.com, PBS.com’s home page, and Politico.com’s homepage. The debate will also be available across mobile devices via CNN’s apps for iOS and Android, via CNNgo apps for Apple TV, Roku, Amazon Fire, Chromecast and Android TV and SiriusXM Channels 116, 454, 795. I also read you might be able to catch it on twitter, but I can’t vouch for it.

PBS NewsHour’s Judy Woodruff, Amna Nawaz and Yamiche Alcindor and Politico’s Tim Alberta will moderate the debate. There will be no opening statements and probably no direct questions from the audience. It will begin at 8ET/7CT/6MT/5PT.

The first PBS/Marist poll was published earlier this week, but as a reminder, here are the standings. Pay attention to the indie support numbers. 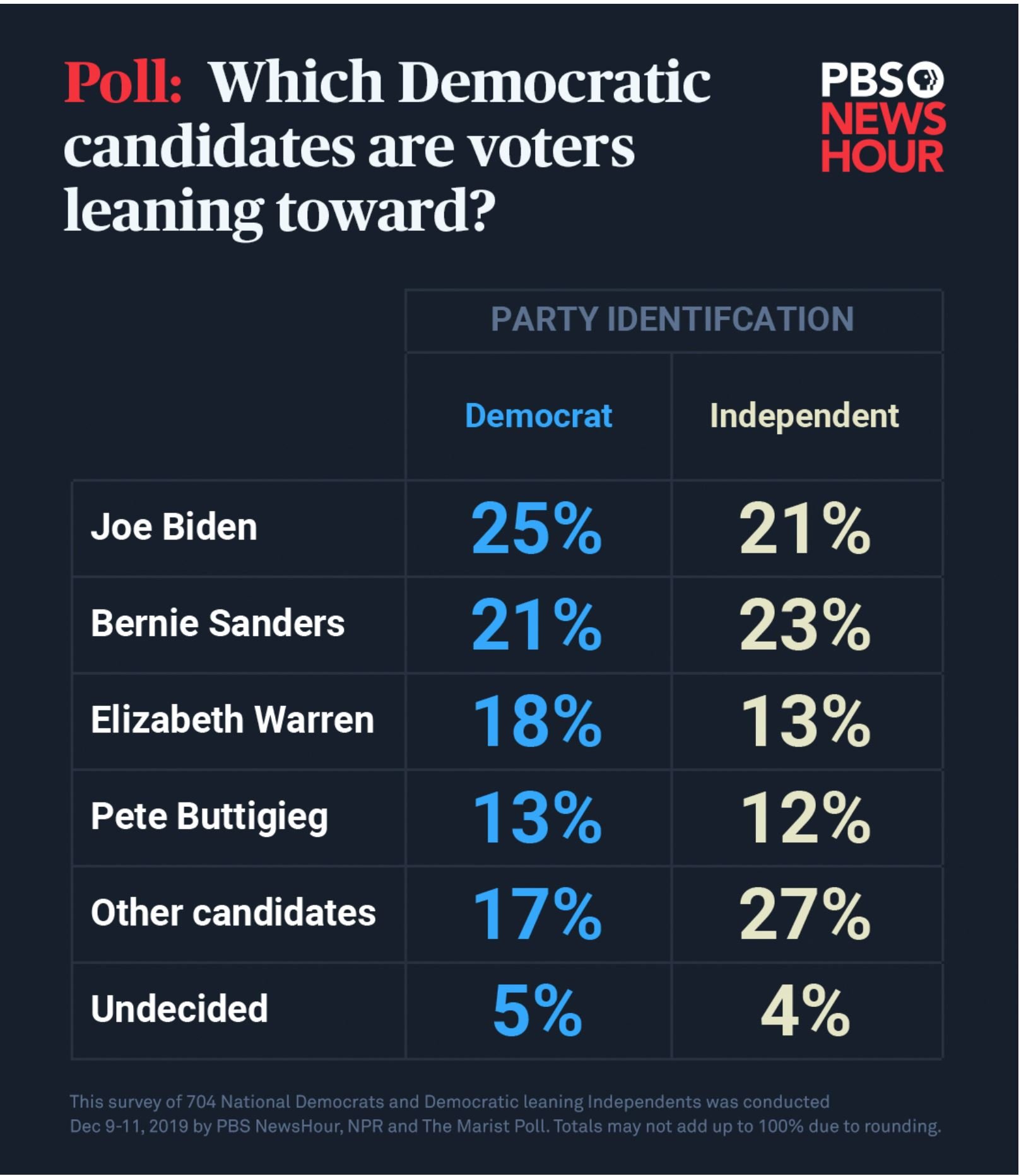 And from the NYT, a chart of indie voter issues: 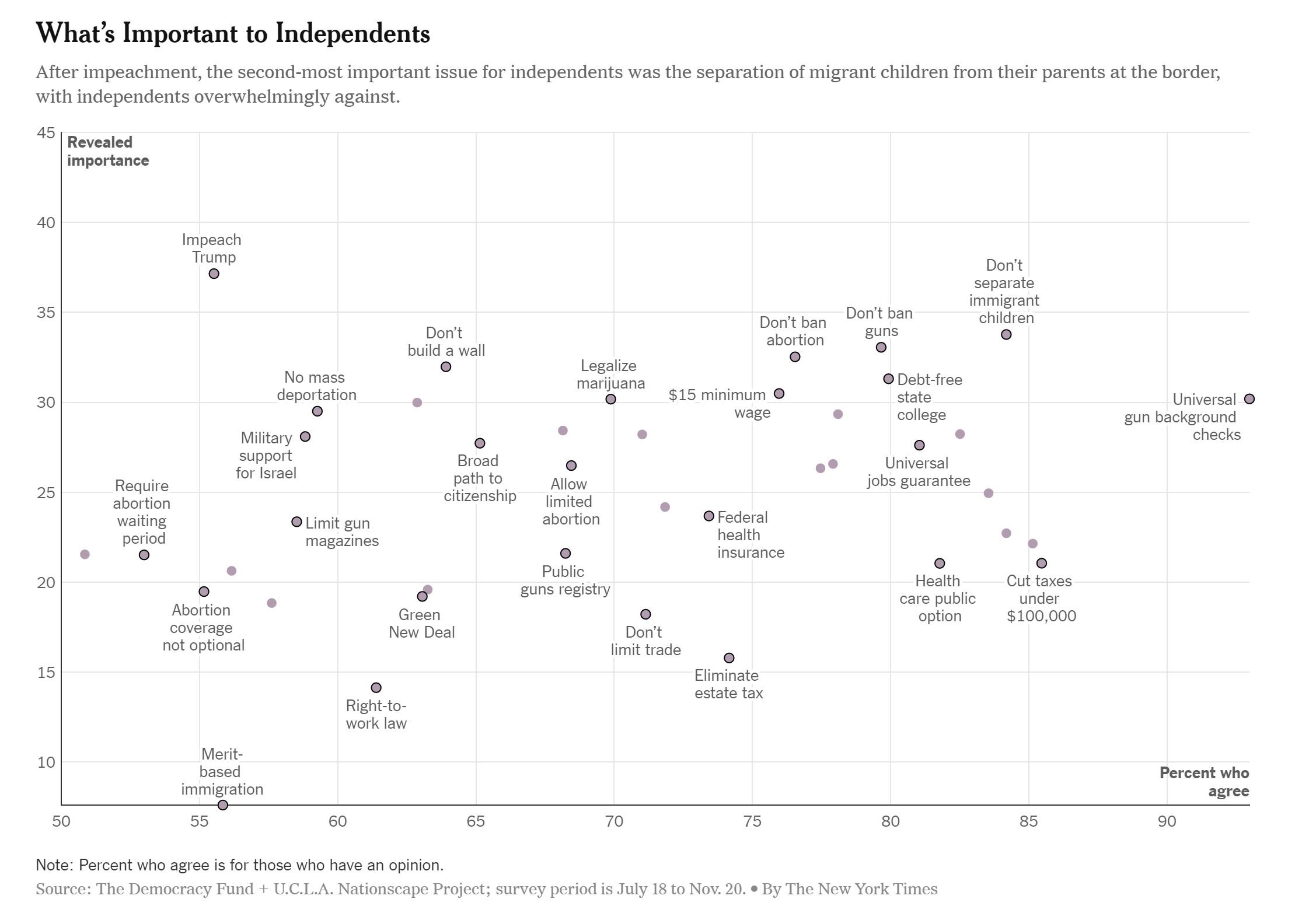 It will be interesting to see how many of these issues will be part of the moderators’ questions this evening. Will they ask anything about indigenous people’s issues?

Anyone having cocktails or special snacks tonight? Popcorn maybe? See you in the comments! This serves as an open thread too.

Tonight is the 5th DNC sanctioned debate, and will be televised on MSNBC. The debate is being held at the Tyler Perry Studios in Atlanta and starts 9 ET. According to WaPO, Georgia is trending purple in its suburbs and may be a closely contested state next year. It is the first debate this cycle featuring an all female pundit group: Rachel Maddow, Andrea Mitchell, Kristen Welker and Ashley Parker.

There are only 10 candidates who qualified for this debate. The qualifications in getting an invitation are as follows:

In terms of donors and polls, Bernie Sanders was the first to qualify for this debate.

Given that the impeachment inquiry has been going on for the past two weeks, one will expect some questions about foreign policy as well as health care. Sanders is the sole candidate who has led legislation on Medicare for All (and expanded!), another expected topic in which Warren will have to continue to explain her new public option plan. “Candidates will have 75 seconds to answers questions posed to them and 45 seconds for follow-ups at the moderators’ discretion. Candidates should be able to respond if they’re referred to by name by another candidate, but that will be at the moderators’ discretion, according to an announcement earlier this month from MSNBC and the Post.” According to NBC News, the debate will be broadcast live on MSNBC and will also stream for free on MSNBC.com and washingtonpost.com as well as across mobile devices via NBC News and The Washington Post’s mobile apps. In addition, audio of the debate will be available on SiriusXM Channel 118, and TuneIn.

NBCNews.com will live blog the debate throughout the night, offering live updates, fact checks and analysis.

TYT.com will offer post debate analysis and reactions in the spin room.

Looks like Biden’s campaign has accidentally sent a post-debate fundraising email out early. It suggests he may target Warren again tonight.

“We need more than plans… We need to reach across the aisle and demand that our leaders do what’s right.” pic.twitter.com/7YSvzy1bGm

See you in the comments! Come join us!

I’ll be sharing some interesting polling data below.

Who will stand out tonight??