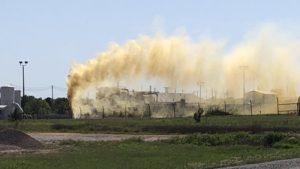 Federal appeals court orders halt to work on Atlantic Coast Pipeline A federal appeals court has ordered a halt to construction of Dominion Energy’s Atlantic Coast Pipeline, finding that restrictions against harming wildlife are inadequate for the controversial 600-mile natural gas project. Three judges of the U.S. Court of Appeals for the Fourth Circuit said in a ruling issued late Tuesday that the U.S. Fish and Wildlife Service had failed to set clear limits for impact on threatened or endangered species. The judges said that “the limits set by the agency are so indeterminate that they undermine . . . the enforcement … END_OF_DOCUMENT_TOKEN_TO_BE_REPLACED

New York City is seeking to lead the assault on both climate change and the Trump administration with a plan to divest $5bn from fossil fuels and sue the world’s most powerful oil companies over their contribution to dangerous global warming.

City officials have set a goal of divesting New York’s $189bn pension funds from fossil fuel companies within five years in what they say would be “among the most significant divestment efforts in the world to date”. Currently, New York City’s five pension funds have about $5bn in fossil fuel investments. New York state has already announced it is exploring how to divest from fossil fuels.

“At the same time, we’re bringing the fight against climate change straight to the fossil fuel companies that knew about its effects and intentionally misled the public to protect their profits. As climate change continues to worsen, it’s up to the fossil fuel companies whose greed put us in this position to shoulder the cost of making New York safer and more resilient.”

De Blasio said that the city is taking the five fossil fuel firms – BP, Exxon Mobil, Chevron, ConocoPhillips and Shell – to federal court due to their contribution to climate change.

We're standing up to take our own action to protect our people, our city and our planet. #DivestNY pic.twitter.com/JlnJwQNdum

More news/videos/tweets/etc. in the comments.