Good piece on Rashida Tlaib posted on The Guardian by Khaled Beydoun, a man with solid credentials (whom I follow on Twitter). 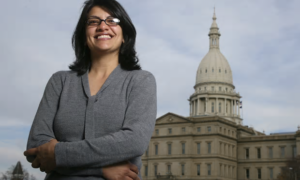 Rashida sounds like the sort of candidate we need to pull this country back from the brink.

Hip-hop, salsa, Detroit house and Arabic music thumped from the speakers. The cafe walls, where the party was being held, were adorned with the work of local artists. There were no suits or gowns, just the squeak of sneakers and blue campaign T-shirts filling the room. Tlaib’s party felt like a real party, where millennials of all races mingled naturally with middle-aged and elderly supporters that were celebrating as the results rolled in.

When I read about her primary win I was surprised that I’d never heard of her before. How did I miss her?

Her message was intersectional long before “intersectionality” was catapulted into the prevailing social justice lexicon. Fighting American Islamophobia was her mandate before the phenomenon became a catchy buzzword. She tenaciously challenged anti-black racism years before the Black Lives Matter movement mainstreamed it into popular consciousness. Rashida defiantly stepped up against the state, and land-seizing billionaires, to defend the rights of vulnerable elements in her community, south-west Detroit, which was predominantly Latinx.

Twelve years later, this commitment to social justice and grassroots organizing is what fueled Rashida to knock down the ultimate door, and make history as America’s first Palestinian and Muslim congresswomen. And indeed, that was the very spirit represented by the brilliantly diverse sea of people that celebrated until Rashida was ready to declare victory, at 2.46am on Wednesday morning.

And she has such a positive message that resonates:

Flanked by her son, Adam, her younger brother Rachid, and her campaign staff, Rashida, in tears, shouted: “I love this campaign and what it represents. It inspired people around the country to know that you do not need to sell out, you do not need to change who you are, to run for office. Be who you are – it’s what our country needs right now.”

Khaled is doing his part on pushing back on the hate and the fear (two negative forces that so often seem bound together). That is also what this country “needs right now”.

Please share anything you’ve picked up on the beaches of our media below!