A special Fight The Feed interview with Jabari Brisport about his run for office, local politicians, and how he’s general able to identify Bernie voters. 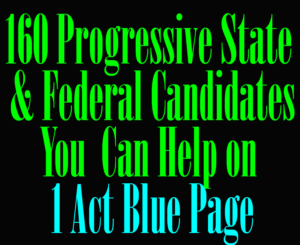 Just 3 – FL-25, WV-01, SC-01 – of the 160+ Candidates you have been supporting on – Progressive-Berniecrats-Primary Winners – 160+ Candidates running in 2016 State and Federal Races that YOU can support on 1 ActBlue page – They can use your support today !!! $58,000+ raised in 23,000+ tiny donations so far…… Please go to the ActBlue story and support Page and make a donation today The Candidates and their support on ActBlue reprinted from their ActBlue page Mike Manypenny VW-01 – Democrat for Congress DR. ALINA VALDES FL-25 – Democrat for Congress – Alina Valdes is running for U.S. Congress in Florida’s … END_OF_DOCUMENT_TOKEN_TO_BE_REPLACED

From CNN: CNN announced Wednesday it will host one of its town hall events with the Green Party’s presumptive presidential nominee Jill Stein and her presumptive running mate, Ajamu Baraka. The hour-long event will be held on Wednesday, August 17 at 9:00 p.m. ET. The event will broadcast live on CNN, CNN International, CNN en Espanol and online via CNNgo. Stein has consistently polled as the fourth-most popular option in the presidential race, after Hillary Clinton, Donald Trump and Libertarian Gary Johnson. In the most recent CNN/ORC poll, Stein received 5% support nationwide, four points behind Johnson, her nearest competitor. … END_OF_DOCUMENT_TOKEN_TO_BE_REPLACED

This is an update. See below original post. This evening Cleveland.com (the online version of the Cleveland Plain Dealer) reports that Nina Turner, firebrand surrogate for Bernie Sanders, is mulling over an offer to join Jill Stein’s VP for the Green Party ticket. Massachusetts physician Jill Stein, the party’s presumptive presidential nominee, reached out with the pitch, Turner told cleveland.com Sunday evening in a telephone interview. The Hill has also picked up this story. The Green Party opens its convention Thursday in Houston. Turner would stand for nomination there if she agrees to be Stein’s running mate. Her decision is … END_OF_DOCUMENT_TOKEN_TO_BE_REPLACED

I am posting this for discussions sake (I borrowed @nomandates flame-retardant suit) and think the likelihood of such a scenario are about as slim as can possibly get but like I’ve said time and time again, I love a good discussion and hearing all your points of view. Plus I see a good deal of benefit to ‘Progressives’ in having the Green Party reach the thresholds for federal funding and debate participation. Green party’s Jill Stein invites Bernie Sanders to take over ticket Bernie Sanders has been invited to continue his underdog bid for the White House by the Green party’s probable … END_OF_DOCUMENT_TOKEN_TO_BE_REPLACED 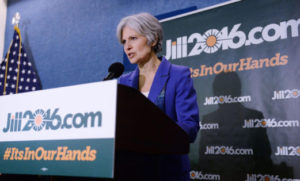 by Yasmeen Abdellatif, Palestine in America Green Party presidential nominee Jill Stein endorsed the Boycott, Divestment and Sanctions Movement (BDS) in a statement released last week. The statement describes BDS as “a peaceful, nonviolent set of actions organized by civil society across the world aimed to end Israeli apartheid, occupation, war crimes, and systematic human rights abuses.” The Green Party has long expressed its support for the BDS movement. The party’s current platform calls for maintaining boycotts and divestments “until Israel meets its obligation to recognize the Palestinian people’s inalienable right to self-determination and fully complies with the precepts of … END_OF_DOCUMENT_TOKEN_TO_BE_REPLACED