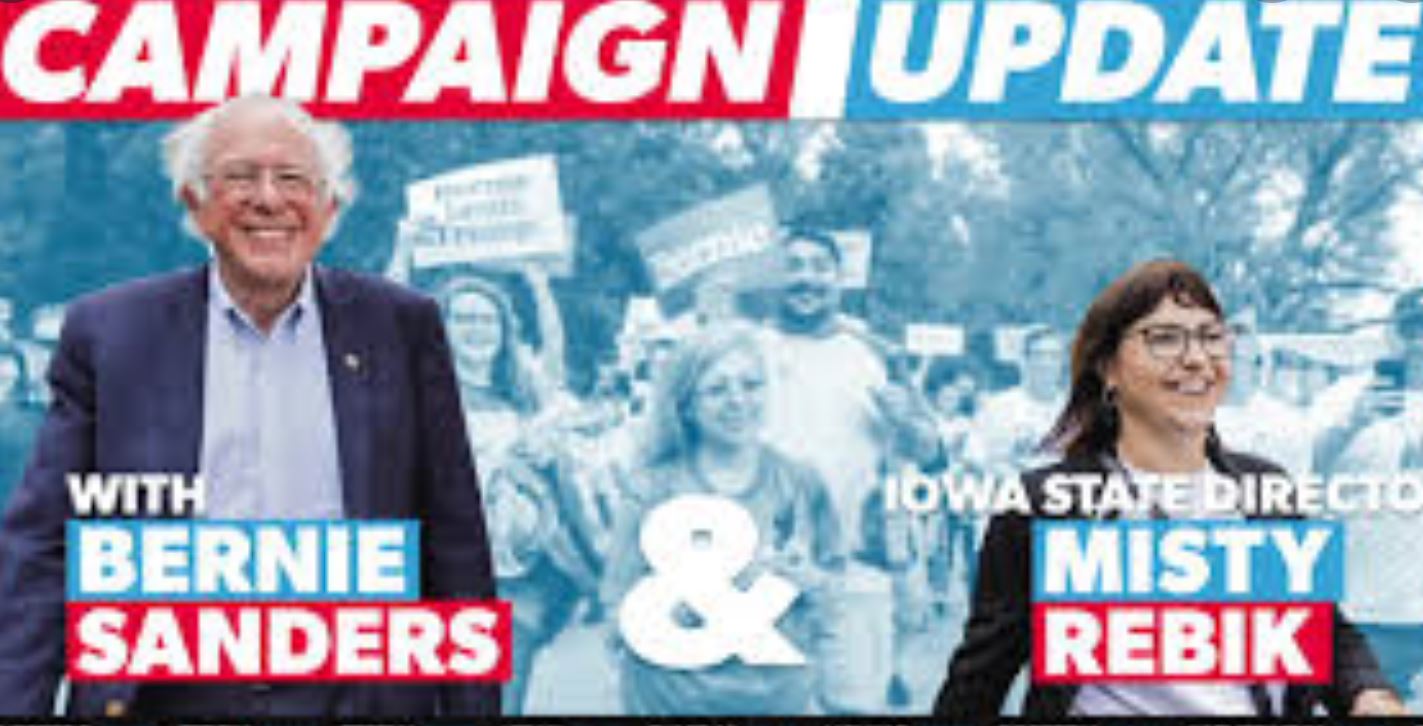 As posted on the earlier thread, Bernie Sanders declared victory in the Iowa Caucus. He won by 6,000. As we all remember from Bernie’s political history, it’s not the first time he’s won narrowly. That was the case in Michigan, and NH/SC/NV will likely be squeakers too.

Bernie Thanks Misty Rebik and the Iowa Team:

.@BernieSanders and our movement won IOWA!!!! Take a moment to savor it. We’re going to win New Hampshire next week and it’s gonna keep getting better & better #NotMeUs pic.twitter.com/f9Qy4toPo9

#BernieWonIA pic from us stragglers left at the @BernieSanders IA HQ!

What an honor to be in the struggle with some of the geekiest, best data folx – and the best damn organizers in the country!

Shoutout to caucus guru Evan Burger who took a call during this pic per Evan style. pic.twitter.com/F6pXzCiHBc

Please go to twitter and send Misty some love and digital red roses!

Clap for the Queen @mistyrebik who organized & managed one of the largest, most inspiring presidential campaigns ever.

You delivered a win for Team Sanders in Iowa & set the movement on a track to win the nomination and the White House.

DNC Chair Tom Perez has called for a “recanvass” which I just learned is a “review” not necessarily a recount. We’ll see if the numbers flip, but for now, onward to NH!

Finally, Bernie speaks out against the DNC Rules Committee for changing the rules to allow Bloomberg into the debates. Rebecca Klar from The Hill reports:

All the people Sanders mentioned are, or were at one time, competing in the Democratic primary.

“And based on the rules determined by the DNC, they were unable to participate in one or more debates,” he added.

Sanders and other candidates in the race have criticized the DNC’s move last week to drop a donor requirement, which has opened the door for Bloomberg to make the debate stage.

Bloomberg was not allowed to participate in the first Democratic debates because he is self-funding his campaign and did not meet the DNC’s requirement that candidates raise money from a certain number of contributors.

Under the rules rolled out last week, Democrats can meet either a delegates threshold or polling threshold to qualify for the Feb. 19 debate in Las Vegas. That could open the possibility for Bloomberg, who has risen in recent national polls, to appear in the event.

The billionaire former mayor of New York City has been running an untraditional campaign, skipping the first voting contests in the primary and instead focusing his resources on March 3, known as Super Tuesday, when more than a dozen states will hold voting.

Sanders on Thursday slammed the party’s decision to change the rules for someone “worth $55 billion,” referring to Bloomberg without calling him out by name.

Reminder: CNN TownHall with Bernie is 7CT/8ET tonight. If I can locate a livestream, it will be posted.

This serves as an open thread for tweets, videos, or other news.

We’ll see how long that lasts.

For the latest news about the results of the Iowa Caucus, here’s one tidbit.

The Associated Press says it has reviewed the updated results and still considers the race too early to call. 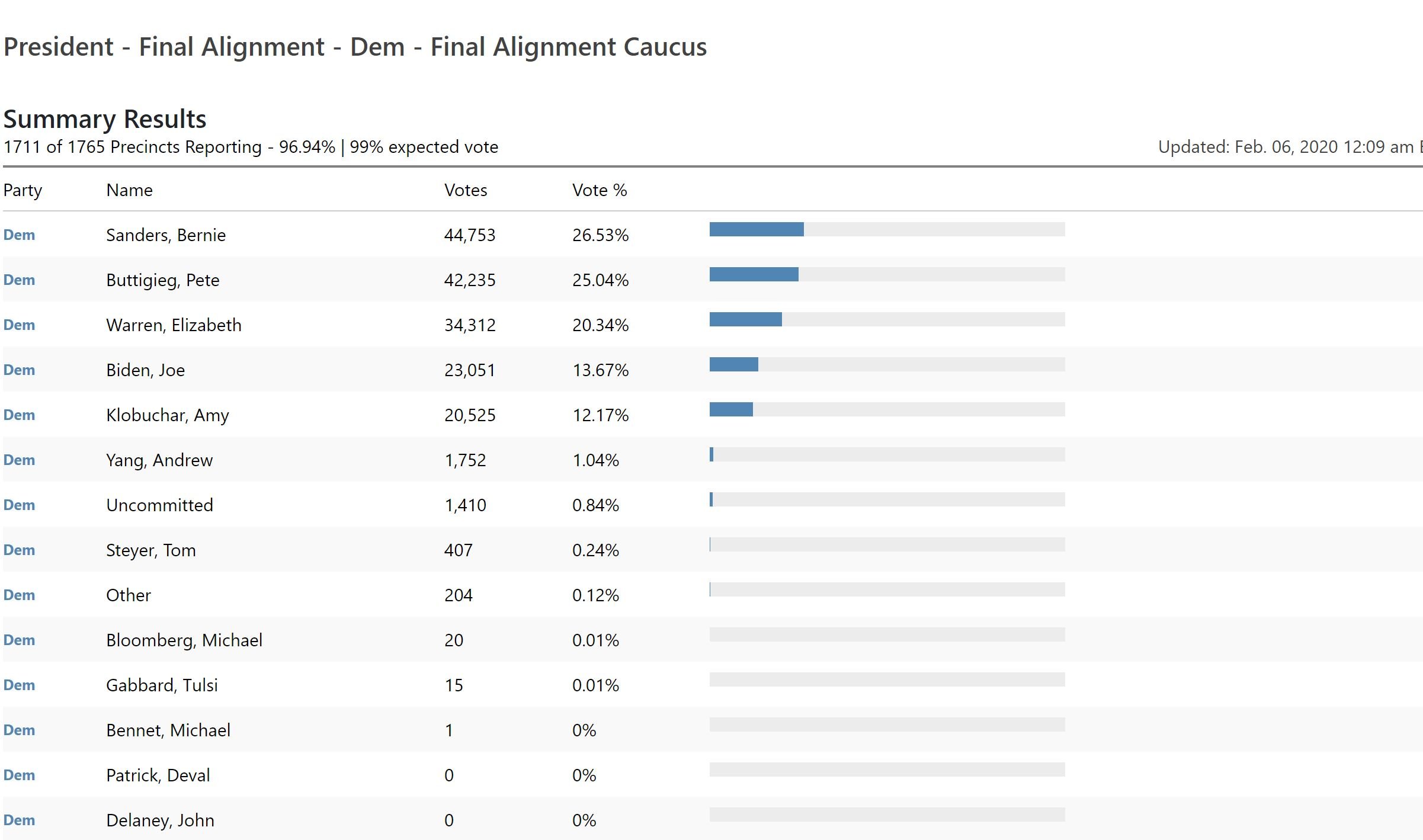 HELLO somebody! @ninaturner brings the fiery facts out. 🔥 We have the constituency to win this. #Bernie2020 pic.twitter.com/Nhfvm1wJGT

Very sad to hear Kirk Douglas has passed away…

He not only was an amazing actor but also producer. He also helped people like Dalton Trumbo come back after the blacklist, & did so much w/ charities.

Regarding Douglas’ movies, I will have to watch Ace in the Hole sometime soon. Spartacus was my favorite, followed by Lonely Are the Brave If you haven’t seen Trumbo, (which is about Dalton Trumbo, a socialist), I highly recommend it. Bryan Cranston is delightful in the role.

More news, tweets, videos in the comments. This serves an open thread.

PartialrResults are supposed to be released at 4 CT this afternoon. Here’s a screenshot of the numbers fed to NBC News (still haven’t found them on the website): 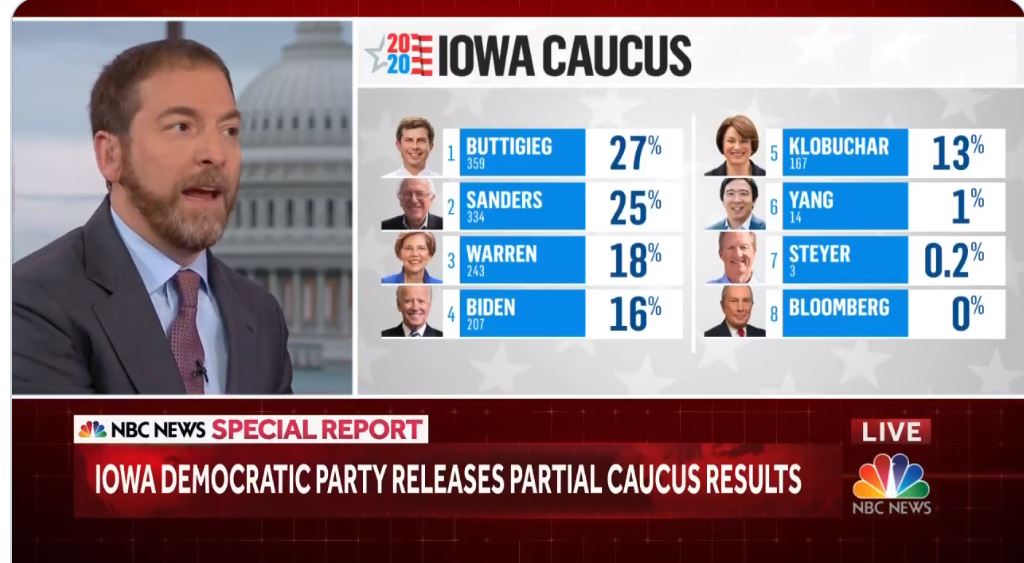 The next graphic is from the NYT: 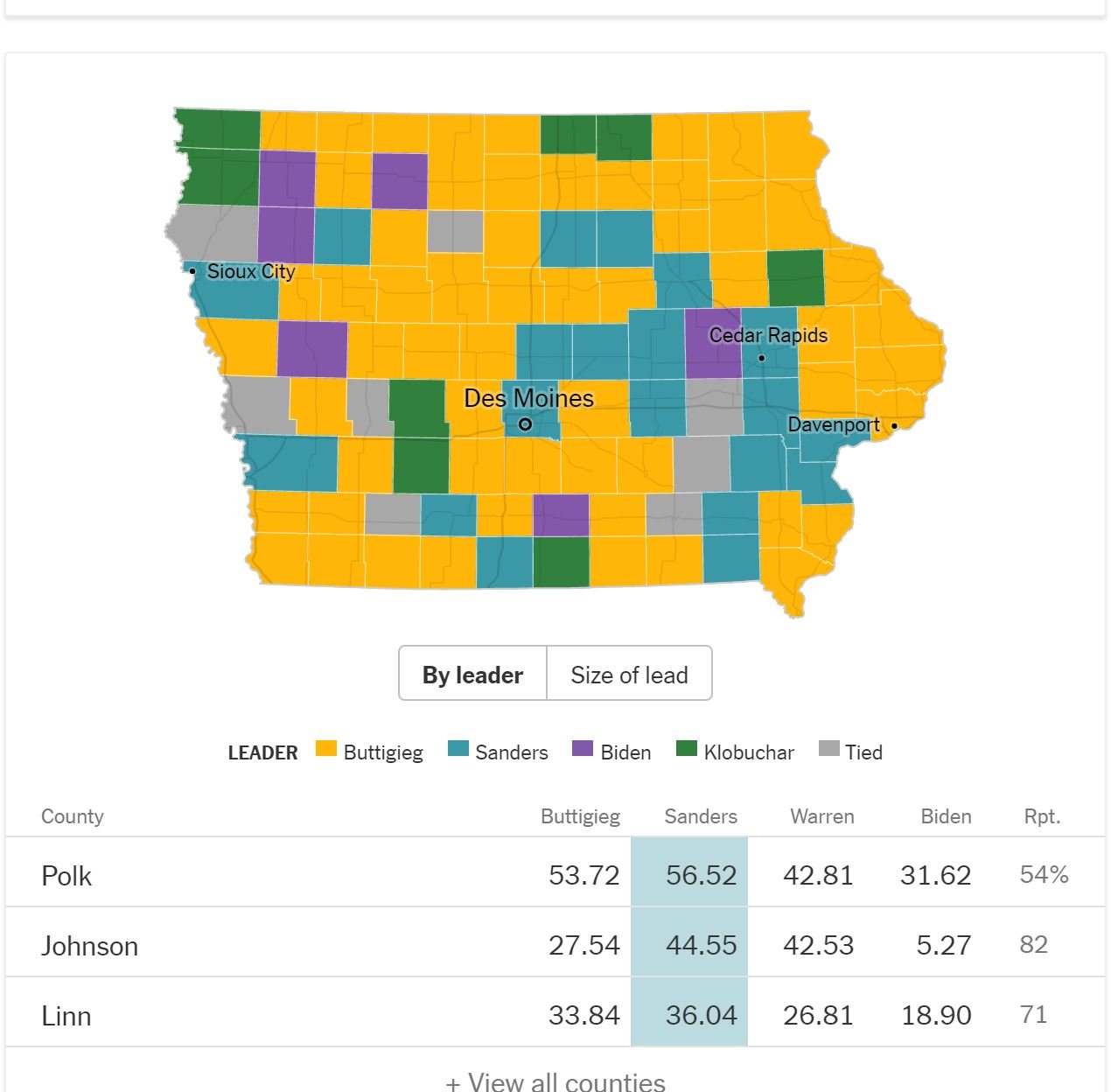 these are the places with the most precinct data missing pic.twitter.com/z8BGdblikb 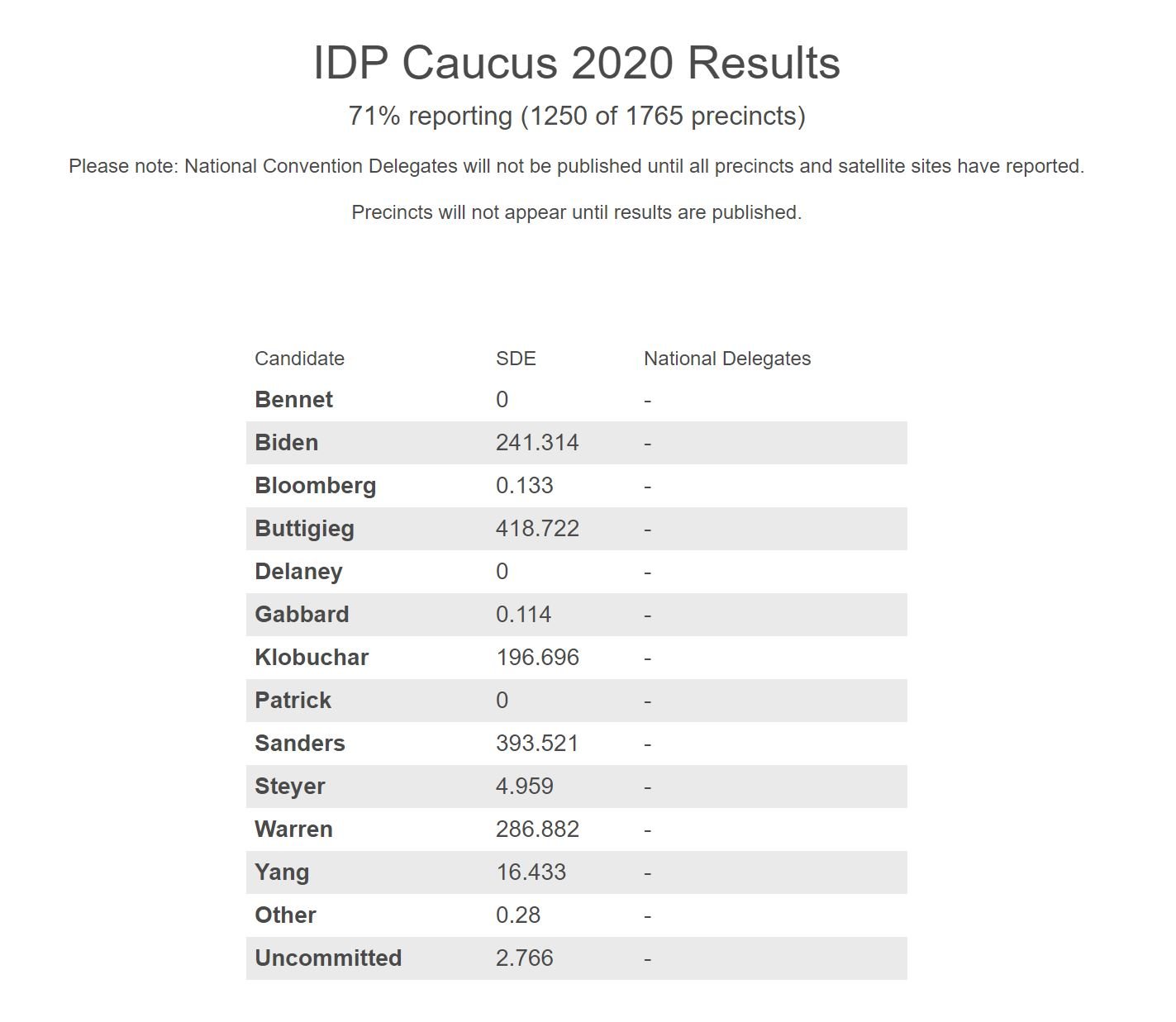 Meantime, the new oligarch on the block seems not to want to release tax returns. Why?

NEW: a voter in Detroit asks Mike Bloomberg why he won’t release his tax returns. Bloomberg ignores the question while one of his paid supporters says “well why should he? Trump hasn’t released his taxes” pic.twitter.com/wX4k89kHXf 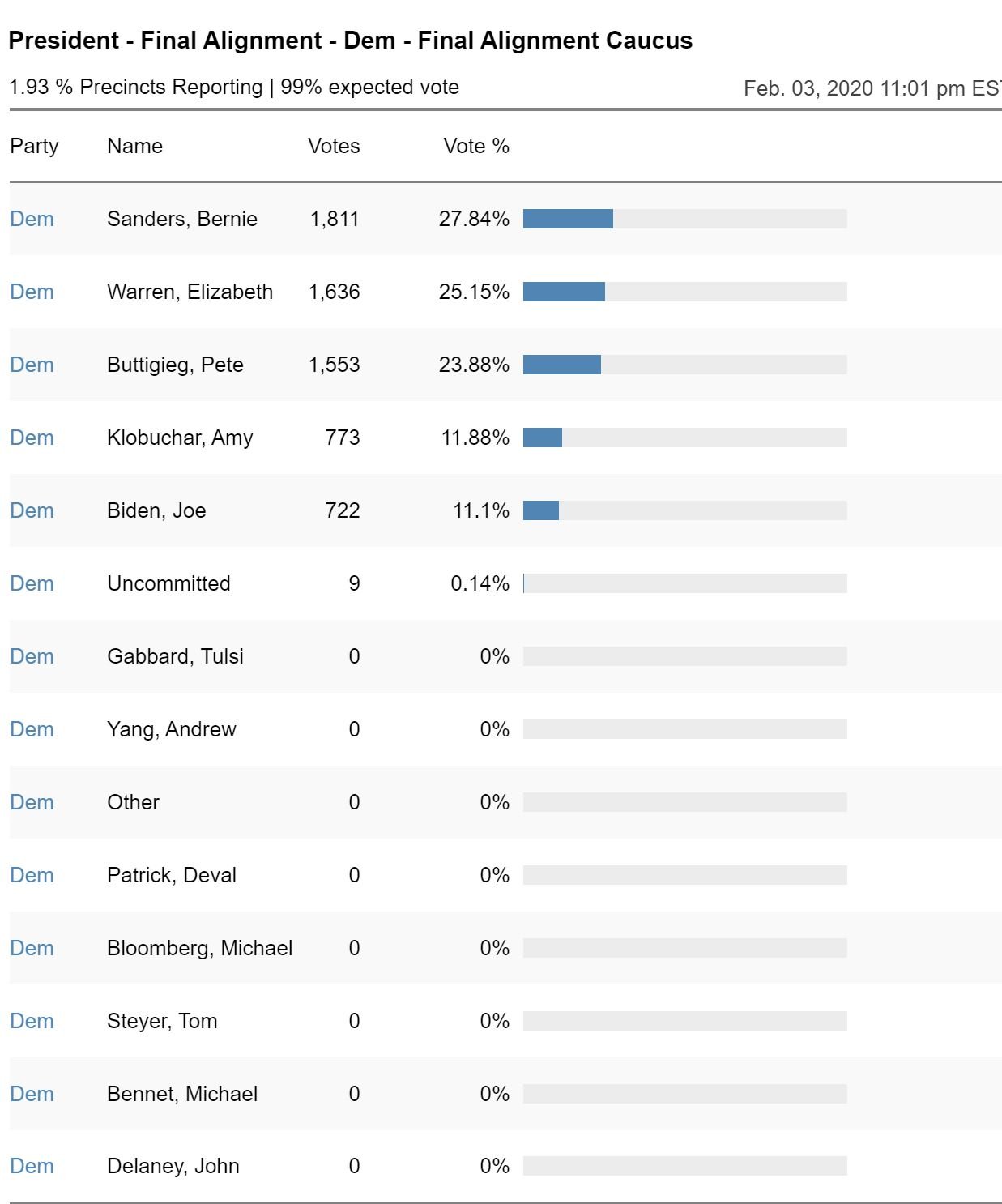 Tomorrow Iowa goes to caucus, and our volunteers have knocked on 500,000 doors in Iowa and made over 10 million phone calls since January 1st to make sure we win. Join me live from our field office in Newton, Iowa: https://t.co/ZVtDo6R6h5

Bernie’s last event in Iowa, at the Des Moines office. Ro Khanna is first up.

More news, tweets, videos in the comments section. This serves as an Open Thread.

Lissie is the first artist tonight at the Caucus Concert for Bernie Sanders. Another night of “Berniestock”; it is being held in Cedar Rapids. 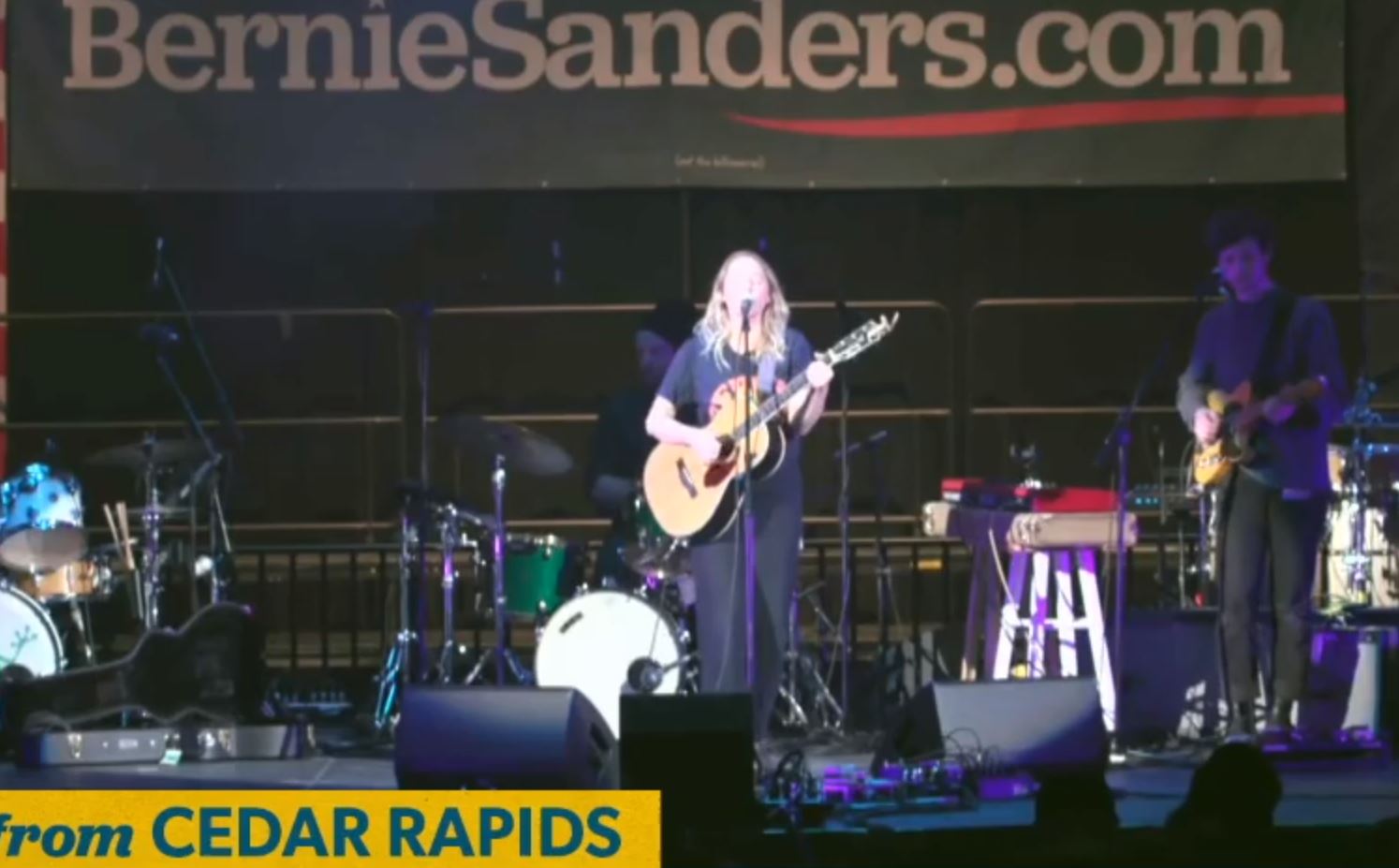 Here’s how things look in Cedar Rapids at tonight’s @BernieSanders rally. Easily the biggest crowd since Queens back in October. pic.twitter.com/07nFQqD4SM

Hello from the Cellular Center in Cedar Rapids, where @BernieSanders has a massive crowd for one of his last major Iowa rallies pic.twitter.com/goCXmeRiBH

UPDATE: The DMR will not be releasing the final installment. I got this from twitter: 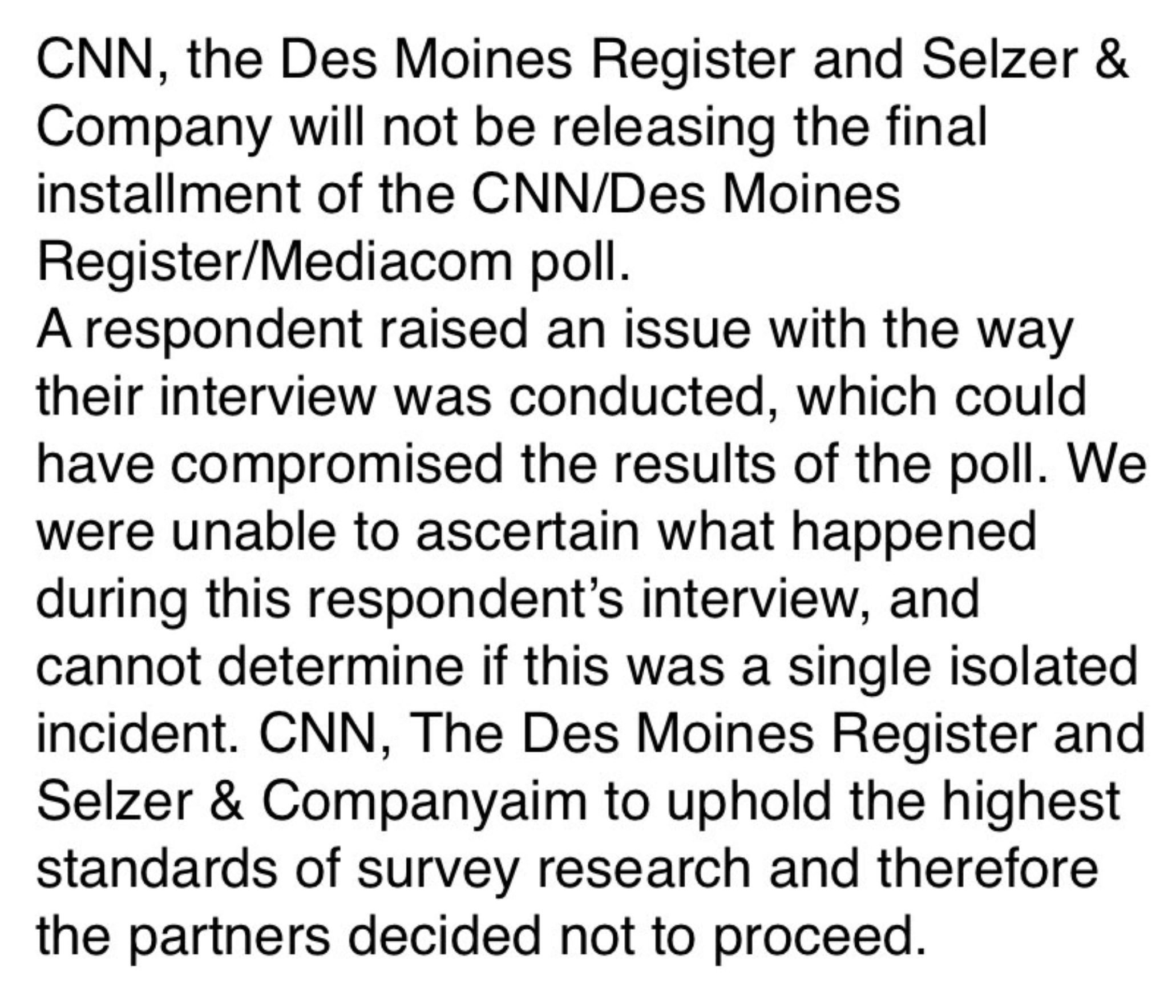 This serves as an Open Thread.