The Wobblies is about the IWW from the last century. Recently re-released, it has been placed into the film registry of the Library of Congress.

This version has Spanish subtitles, but it is the film.

More about the film:

“Solidarity! All for One and One for All!” With that slogan, the Industrial Workers of the World, aka the Wobblies, took to organizing unskilled workers into one big union and changing the course of history. Along the way to winning an eight-hour workday and fair wages in the early 20th century, the Wobblies were one of the few unions to be racially and sexually integrated and often met with imprisonment, violence, and the privations of prolonged strikes. This award-winning film airs a provocative look at the forgotten American history of this most radical of unions, screening the unforgettable and still-fiery voices of Wobbly members–lumberjacks, migratory workers, and silk weavers–in their 70s, 80s, and 90s. Eerily echoing current times, THE WOBBLIES boldly investigates a nation torn by naked corporate greed and the red-hot rift between the industrial masters and the rabble-rousing workers in the field and factory. Replete with gorgeous archival footage, the film pays tribute to American workers who took the ideals of equality and free speech seriously enough to die for them. Directed by Stewart Bird and Deborah Shaffer, THE WOBBLIES is a rare and challenging invitation to rethink both past and present the eyes of an organization largely omitted from memory.

May Day celebrates fertility as well as workers’ rights. Seems like a metaphor for the unionization spring we’ve seen with Starbucks and Amazon. 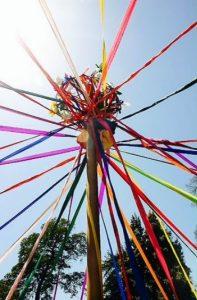 More news and perspectives in the comments.

I want wish each and every one of you a very happy May Day. When working people in our country and around the world come together, there is nothing that can stop us in the struggle for justice.