A fire at the Grenfell Tower in London on Wednesday may have killed a hundred people: As the confirmed death toll rose to 30, there were reportedly as many as 70 people unaccounted for since the blaze, which police fear was so devastating that some victims may never be identified. The official number of deaths has sparked anger and confusion within the local community, where people believe the true number is considerably higher.  — Guardian Labour Party leader James Corbyn visited the complex on Thursday, meeting with survivors. He comforted those searching for loved ones. ​Corbyn comforting a woman holding … END_OF_DOCUMENT_TOKEN_TO_BE_REPLACED 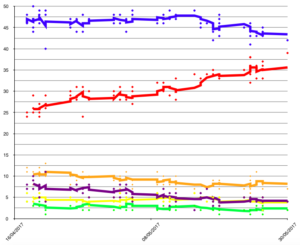 James Corbyn’s proved himself to be a tenacious leader. He was chosen by rank and file members to be the Labour party’s leader after their disastrous showing in the 2015 general election. Though Labour’s centrist MPs mounted a no-confidence campaign against Corbyn after the EU referendum, he won the leadership position again, with an even larger portion of the vote. Now, Corbyn faces his first general election contest. When Conservative Prime Minister Theresa May first called the snap election (reversing her own public statements), Labour was down over 23 points to the Tories. It looked like the Labour party was heading … END_OF_DOCUMENT_TOKEN_TO_BE_REPLACED