Joe Biden says he isn’t giving up on his campaign’s chances in New Hampshire, but he won’t be sticking around in the state to see the first-in-the-nation primary results.

The former vice president told reporters Tuesday that he’s flying to South Carolina, skipping out on the election night party in Nashua where he was slated to speak, as polls show his once-strong support slipping in the Democratic primary race.

“We had a lot of great friends here who have helped us a lot,” Biden said as he stood in line at a Dunkin’ restaurant in Manchester. “We’re still mildly hopeful here in New Hampshire, and we’ll see what happens.”

As we know, three townships voted last night. Amy Klobuchar may have gotten a good start, but what the media doesn’t tell ya? Bernie Sanders was the sole candidate who got at least one vote in each of the three townships. So, it’s still good anticipation.

The polls have closed! The bar is open, drinks on the House, courtesy of all of us! Got your Bernie Blue on? Let’s hope the turnout is high and shows Trump that he won’t retake it in the fall either!

Other Sites to check for updates:

I’ll start the thread with Carly Simon. Add your tweets, videos, articles in the comments section below.

In the final numbers, 29% of likely primary voters say they back Sanders, 22% back former South Bend, Indiana, Mayor Pete Buttigieg, 11% support former Vice President Joe Biden, 10% support Massachusetts Sen. Elizabeth Warren and 7% back Minnesota Sen. Amy Klobuchar. The rest of the field falls at 5% or less.
Only about half of likely primary voters in New Hampshire say they have definitely decided for whom they will vote, meaning that despite the stability in the numbers throughout the six-day tracking period, there remains room for preferences to shift.

Sanders has a gaping 24-point lead among those who say they are committed to their candidate (42% for Sanders, 18% for Buttigieg, 14% for Biden, 10% for Warren, 6% for Klobuchar). Buttigieg holds an 11-point lead among those who could change their minds (26% for Buttigieg, 15% for Sanders, 10% for Warren and 7% each for Biden and Klobuchar).

Although none of the movement in the poll appears to threaten Sanders’ or Buttigieg’s place near the top of the field, there has been some growth in support for Klobuchar and for Biden in the final two days of fielding. While Klobuchar landed at 4% support in interviewing on Thursday and Friday, she holds 11% across Saturday and Sunday dialing. Biden, meanwhile, stood at 8% in the earlier two days and 14% in the final two. Those differences could suggest real movement, or may reflect a difference between those who are reachable on weeknights compared with weekends.

Warren continues to top the list of voters’ second choices (20% say she’s their second-choice candidate), followed by Sanders at 15% and Buttigieg at 14%.
Nearly six in 10 now say that Sanders is the candidate most likely to win New Hampshire’s Tuesday primary (59% say so, that’s ticked up from 56% in the first wave of tracking released on Saturday), while 10% expect a Buttigieg win and just 6% each a Biden or Warren win.

Sanders has also held on to his new edge as the candidate with the best chance to win in November, 30% say he’s that candidate, 22% say Biden, 13% Buttigieg.

Nearly TWICE as many people showed up to our canvass launch here in Nashua, New Hampshire. In the last few days you’ve knocked on over 20% of the doors in this state, and you’re still going! Putting the “US” in #NotMeUS! pic.twitter.com/HoGY0jT8YQ 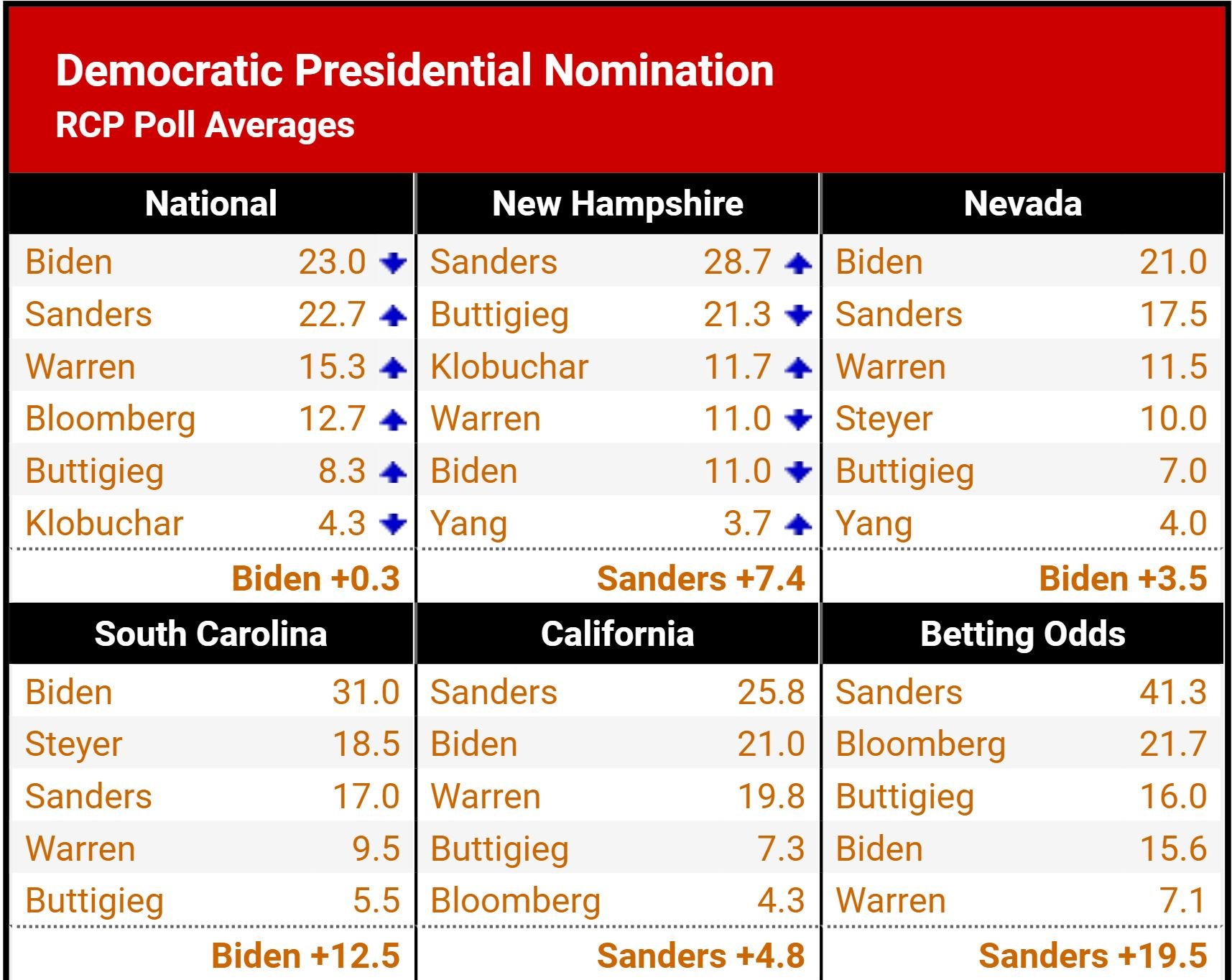 Looks like the foot is leading the door to be more open for Bernie’s campaign.

Gonna be a big event tonight, folks. Even by Bernie campaign standards

Trump’s got a giant rally of his own going on tonight.

We’re ready to drive the kind of enthusiasm and excitement you’ll need to defeat him. https://t.co/RnBhyVluxm

UPDATE: livestream for the Bernie/AOC Rally Tonight. Looks like they are doing it is a telethon too, seeking $10,000.

More news, tweets, videos, and analysis in the comments section. See you there!

Today is New Hampshire’s primary election. The race that most are watching is the very crowded CD-01, in which there are 11 candidates vying for the nomination. NOTE: as there are two diaries, this one will now be for commenting on the primary. For the Open Thread, go to the diary above this one. As the list reveals, Levi Sanders, son of our progressive hero of VT, is running in the primary. His poll numbers are low, however. Bernie Sanders chose not to endorse anyone in the field. The NYT has one lens on this House race: On the Democratic … END_OF_DOCUMENT_TOKEN_TO_BE_REPLACED