Welcome to Live Thread number 2, late afternoon/evening for most of us. Looks like it’s going to be a real slog; at least they got started early.

Just some of the incredible field team that powered our victory in Nevada. We all should be endlessly grateful for their hard work. pic.twitter.com/DurQglwIEq

Earlier this week in a conversation about the Sanders campaign and the behavior of his staff and supporters I referred to his campaign spokesperson as coming from the Island of Misfit Black Girls. It was a harmful and unnecessary comment and I apologize.

BREAKING – Data at the precinct level for 33 majority-Latino precincts statewide shows Sanders winning 74% of final alignment votes in these 33 precincts compared to 18% for Biden. As more data is reported, we will release updated analysis – by @MichaelHerndon_ & @mfr_roman pic.twitter.com/7UAWr9QbjE

Meantime, Bernie just finished holding a rally in San Antonio. Potential voters waited in line for over a couple of hours!

Please continue the conversation in the comments. I’m adding a song by MJ, at the height of his bestseller, Thriller.

Tonight is the Nevada debate!

.@BernieSanders does a #DemDebate walk-through as the front runner of Democratic presidential primary.

Going into the debate, here’s the latest NBC/WSJ poll. 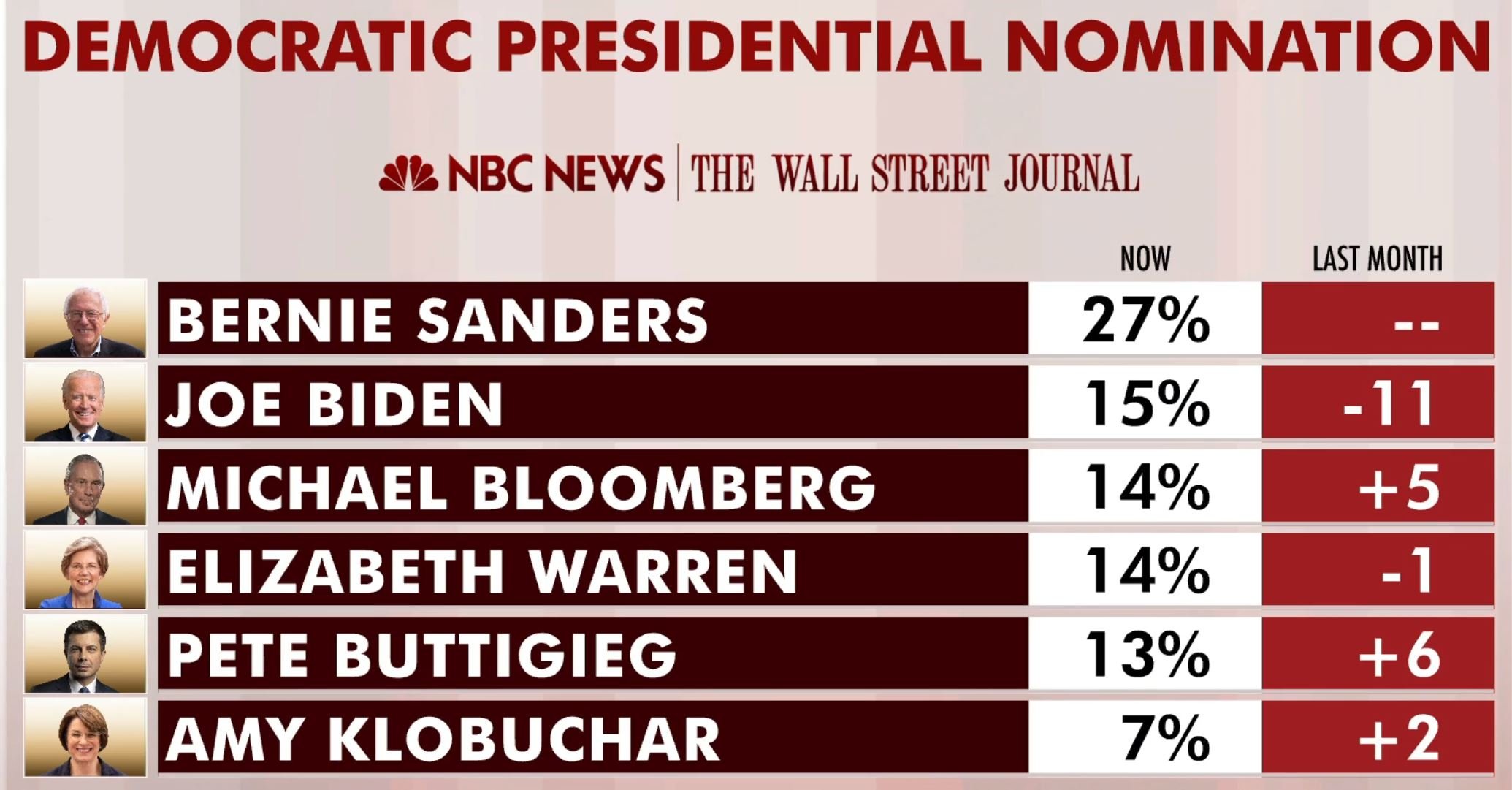 Only 6 candidates are at the podiums tonight. One of them isn’t Tom Steyer. Instead, he’s been replaced by another billionaire, Mike Bloomberg. He failed to qualify. 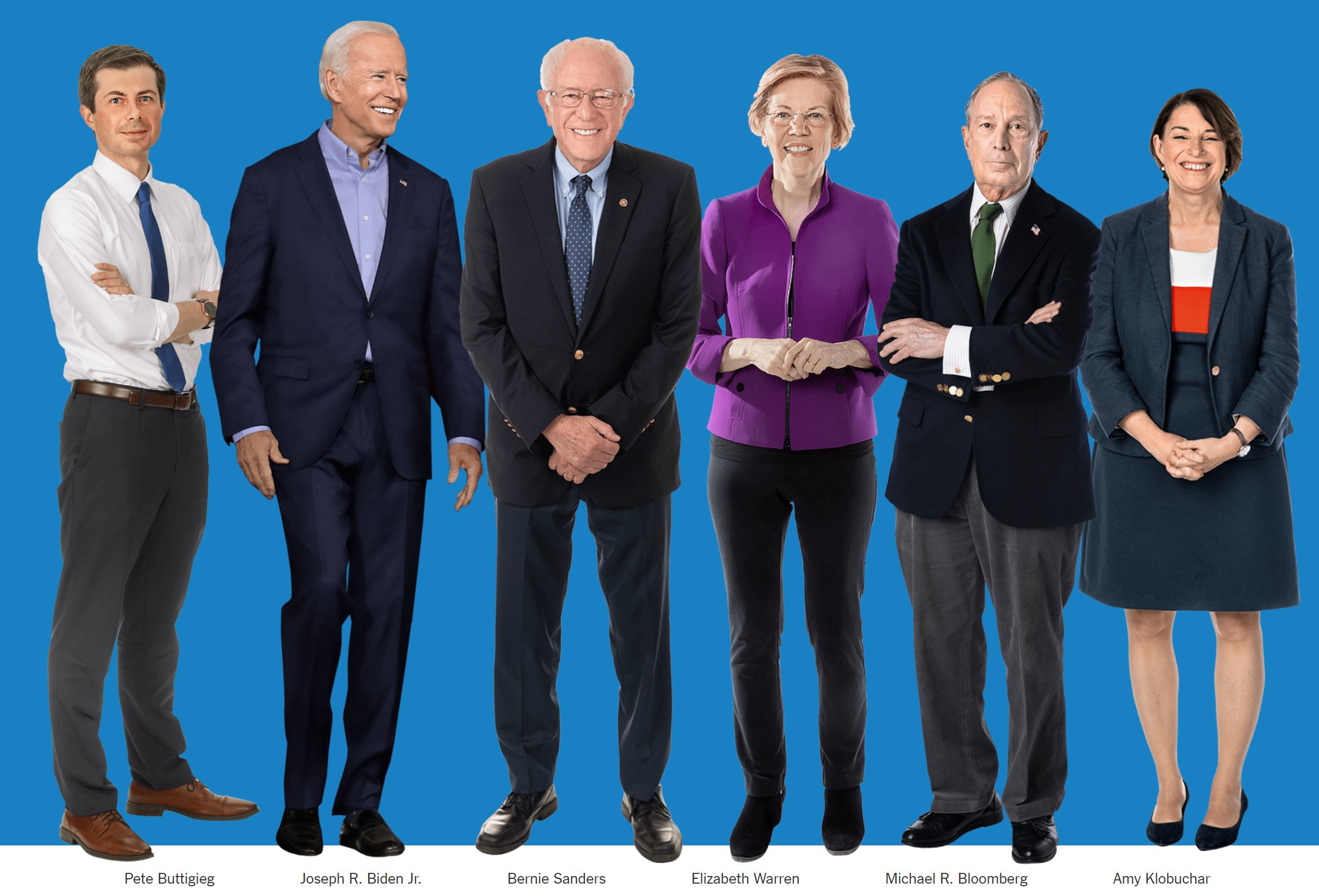 The debate is scheduled to be from 8-10 CT in Las Vegas. Moderators will be from NBC News, MSNBC, and The Nevada Independent. Not exactly Bernie neutral panel. But will they try to ask some substantive questions, or will it be more about how each candidate’s campaign will handle the electability issue, which was the overarching theme of the CNN town halls last night.

This will be the ninth Democratic debate but the first featuring former Mayor Michael R. Bloomberg, and he is bound to face an avalanche of attacks from his rivals. Mr. Bloomberg’s rise in recent polls has coincided with the decline of Joseph R. Biden Jr., who needs a big debate performance to recover from stinging losses in Iowa and New Hampshire.

Senator Bernie Sanders, who appears in strong shape heading into Nevada’s caucuses on Saturday, simply needs to continue avoiding the scrutiny that some rivals have received in past debates. Tonight is also a chance for Senator Elizabeth Warren to regain her footing pre-Super Tuesday and for Pete Buttigieg to show he can speak to the concerns of a racially diverse electorate. The surge of Senator Amy Klobuchar in New Hampshire after one strong debate showed just how much these television spectacles can matter.

Should be entertaining, but I hope it’s more serious than that. So, do we take a sip everytime Bernie Bros comes up? Or Obama’s legacy issues? Or if the framing of the questions are about electability, not the substance of the issues?

Bar is open. More conversations to be found in the comments below.