Along the Keystone XL Pipeline, Hoping for a Miracle

The pipeline, expected to be operational in 2023, would transmit 830,000 barrels of crude oil a day from Alberta’s tar sands to refineries on the Gulf of Mexico, crossing through the US Midwest. Environmentalists believe that should the pipeline succeed, it will commit North America to continued investment in fossil fuels, dooming any realistic effort to curb climate change.

“The reality of the footprint is so much beyond what the pipeline itself is just doing. [There are] spills and leaks and those kinds of risks, but folks living there are already experiencing increased truck traffic and risks of Covid,” said Gabby Brown, the senior press secretary of the environmental organization Sierra Club.

The US Army Corps of Engineers has attempted to push through construction under Permit 12—a fast-track water crossing permit. But a federal judge, in response to a lawsuit filed in July of last year by members of the Northern Plains Resource Council and other environmental groups, prohibited the Corps from using this permit. Plaintiffs claim that the Corps violates the Clean Water Act and challenges the Endangered Species Act and the National Environmental Policy Act. “The idea that a foreign country could impose imminent domain and violate the sovereignty of another country with the support of our so-called leaders is unbelievable…. What is the benefit? A few short-term jobs and longtime destruction?” Dena Hoff, a plaintiff and member of the Northern Plains Resource Council, said to me this month.

To add to the destructive legacy of the Trump Administration:

Hypocritical. If Judge Amy is true originalist she should have automatically disqualified herself as framers did not think women were fit to vote nor be counted as full person. 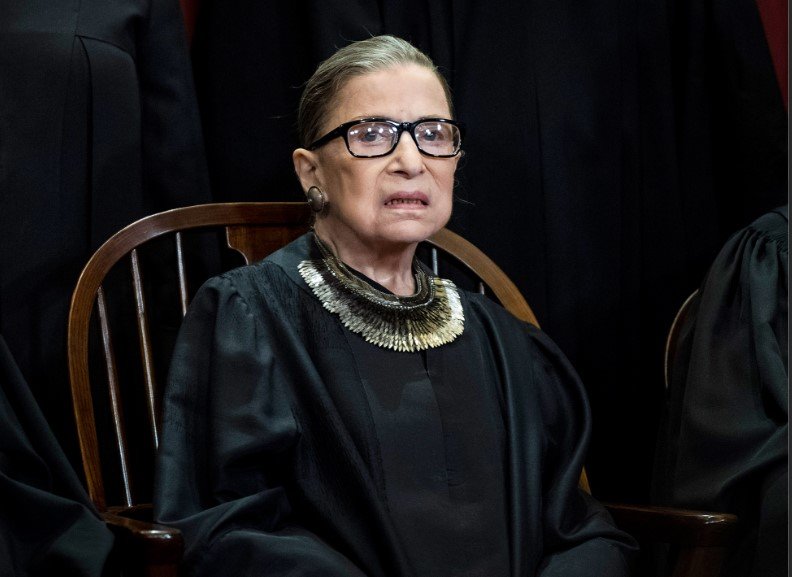 We got the news today, oh boy.

Justice Ruth Bader Ginsburg, the liberal leader of the Supreme Court and a trailblazing champion of women’s rights, died Friday. She was 87 years old.

The Supreme Court said in a statement that Ginsburg died “surrounded by her family at her home in Washington, D.C., due to complications of metastatic pancreas cancer.”

Seen as a moderate when President Bill Clinton nominated her to the bench in 1993, Ginsburg went on to leave a lasting mark in the realm of gender equality, civil liberties and pay equity, and grew to achieve improbable late-in-life recognition as a pop culture icon and hero of the progressive movement.

Her first major opinion as a justice came in 1996 when she wrote the majority decision in United States v. Virginia. The ruling struck down the Virginia Military Institute’s 157-year-old policy of male-only admissions as unconstitutional, and set a stricter legal standard for government action that treats men and women differently.

“Women seeking and fit for a VMI-quality education cannot be offered anything less under the state’s obligation to afford them genuinely equal protection,” Ginsburg wrote in the 7-1 decision.

According to Linda Greenhouse, a longtime Supreme Court reporter and analyst for The New York Times, it was through Ginsburg’s dissenting opinions during the mid-2000s that she “found her voice, and used it.”

One such dissent came in 2007 after the court ruled 5-4 on procedural grounds to bar a pay discrimination claim brought by former Goodyear Tire employee Lilly Ledbetter.

Ginsburg took the relatively rare step of reading her dissent from the bench to signal the intensity of her disagreement, with the 5-foot-1-inch tall justice donning a gold-embroidered black jabot for the occasion. It would not be the final word on the case, however.

In 2009, President Obama signed his first official legislation with the Lilly Ledbetter Fair Pay Act, which effectively overturned the Supreme Court’s decision by making it easier to file pay discrimination suits. Ginsburg kept a framed copy of the bill, signed by Obama, in her chambers.

Though Ginsburg became the high court’s leading liberal, she was best friends with its leading conservative. The late Justice Antonin Scalia and Ginsburg were an unusual pair — he a gregarious conservative, she a soft-spoken, self-described “flaming feminist litigator” — but they bonded over their love of the opera.

Similarly, Ginsburg spent the early part of her career as a legal pioneer in her own right, embarking on a ground-shifting legal crusade in the 1970s for gender equality under the law as an attorney at the American Civil Liberties Union that included successfully arguing several cases before the Supreme Court.

At the tail end of her career, the octogenarian Ginsburg became a pop culture sensation. She captivated millennials, who affectionately dubbed her the “Notorious R.B.G,” a nickname inspired loosely by the late rapper Notorious B.I.G.

Ginsburg was the subject of a documentary, a feature film starring actor Felicity Jones, memes, merchandise and several books, including one on her exercise routine at age 85: pushups, planks and squats.

At speaking engagements, Ginsburg was often asked how she balanced her judicial career with her family. That was when she spoke fondly about her husband.

“He’s the only boy I’ve ever known who cared I had a brain,” she said while speaking at Georgetown Law in 2018.

Her husband, the late Marty Ginsburg, died from cancer in 2010.

Justice Ruth Bader Ginsburg was one of the great justices in modern American history and her passing is a tremendous loss to our country. She will be remembered as an extraordinary champion of justice and equal rights.

May her memory be a blessing. May her legacy be a banner going forth.


We will miss her. Discuss. This is also an open thread for this pivotal evening regarding the election 2020 campaign season. What will McConnell and Trump do?

Bernie Sanders to campaign for Scholten in Sioux City Scholten, a Democrat from Sioux City, said Sanders would make stops on Oct. 20 in Sioux City and Oct. 21 in Fort Dodge and Ames. Scholten, who is challenging Republican Rep. Steve King, announced Sanders’ appearances during a dinner sponsored by the Woodbury County Democratic Party Friday night. In Sioux City, Sanders will join Scholten at a rally at Morningside College. Along with the visits to Fort Dodge and Ames the next day, Sanders will appear in three of the four largest cities in the heavily Republican 4th district, which covers … END_OF_DOCUMENT_TOKEN_TO_BE_REPLACED

(image courtesy of NJ.com) Brett Kavanaugh squeaked through the Judiciary Committee to be allowed a vote on the floor of the Senate to see if he gets his promotion to the SCOTUS. And who was responsible for that? These 11 scrubs: That includes the retiring senator from AZ, who should have rejected this candidate after that afternoon shit show abysmal hearing yesterday and the conduct of the committee this morning, especially by Chairman Chuck Grassley. It’s been reported as well that senators Lisa Murkowski and Joe Manchin (who is equally a scrub because he said he found Kavanaugh “credible” yesterday … END_OF_DOCUMENT_TOKEN_TO_BE_REPLACED

Live blog of the hearing. Every. Woman. In. This. Photo. #kavanaugh pic.twitter.com/EFk4LB1g4s — RogueWhiteHouse (@whitehouserogue) September 27, 2018 This is also an open thread for your news, tweets, videos in the comments section.

END_OF_DOCUMENT_TOKEN_TO_BE_REPLACED

Sanders: Kavanaugh allegations deserve “very hard look” Very serious allegations have been made by Dr. Ford,” Sanders said. “Those allegations are going to have to be examined thoroughly. I regarded an outrageous statement by the President of the United States dismissing those allegations. I hope that the Senate takes a very hard look at what she has to say.” Dr. Ford has agreed to an open hearing with the Senate Judiciary Committee on Thursday. Meanwhile, the AP reports, a second allegation of sexual misconduct emerged against Kavanaugh on Sunday, a development that has forced the White House and Senate Republicans … END_OF_DOCUMENT_TOKEN_TO_BE_REPLACED

Ever wonder about states’ rights and how they impact democracy in general? This week, I had to get my driver’s license renewed. In some states, such as IL, you can obtain renewal online. But only if you (A) Don’t take any prescriptions that could affect your driving performance, (B) Can Afford the $31 Renewal fee, and (C) Under the age of 70. In my case, caveat A required a doctor’s signature to declare that your health is fit enough to drive. I am not unhealthy, but I do have borderline issues that require a yearly and semi-annual check up. In … END_OF_DOCUMENT_TOKEN_TO_BE_REPLACED

Recently, there have been several strikes by our public school educators, most notably in West Virginia. It even grabbed the attention of a neoliberal publication such as The Atlantic, which more or less said the WV teacher strike was a shot across the bow. Last week, Alia Wong wrote: Even though the West Virginia walkout is over, however, observers suspect that it has jump-started a national movement that could have lasting implications for the country’s schools. Evidence that the success of West Virginia’s roughly 20,000 K-12 classroom teachers is intensifying educator unrest nationally can already by seen. In Oklahoma, where … END_OF_DOCUMENT_TOKEN_TO_BE_REPLACED