A follow up to a tweet I shared yesterday of a mailer that Ted Cruz’s campaign sent to an 88 year-old woman with very deceptive wording on the envelope. Our polarbear4 had asked if it was legal. It appears that it was not: Hello. This is violation of the Texas Deceptive Trade Practices Act (DTPA). I know, because I passed this law in 2015. See below: https://t.co/9oga4Gq8Zy — Gene Wu (@GeneforTexas) September 16, 2018 Please feel free to share below and I hope you all have a great day!! UPDATE: LOL, you all are so nice to me-as far as … END_OF_DOCUMENT_TOKEN_TO_BE_REPLACED

Sanders, Warren, O’Rourke inspire patriotic small donor waves During the 2016 presidential campaign, Senator Bernie Sanders (I-Vt.) fired the small-donor fundraising shot that was heard around the political world and now stands on the brink of transforming American politics for a long time to come. The Sanders fundraising triumph in 2016, raising huge amounts of money by refusing dirty special interest money and appealing to intensely patriotic and idealistic small donors, is a living legacy that is demonstrating enormous political power as the midterm elections and the 2020 presidential campaign come closer. .. Now Rep. Beto O’Rourke (D-Texas), who is … END_OF_DOCUMENT_TOKEN_TO_BE_REPLACED

I was seriously disturbed to read loathsome LaPierre’s speech yesterday at CPAC. LaPierre comes across as a raving lunatic, but what I found upsetting is how divisive, inflammatory and, well, really not helpful such talk is in these tense times. However, it was good to hear pushback on the insane idea of arming teachers in schools. The cost and the reality of such a plan (if police showed up in an active shooter situation, and multiple people are brandishing weapons, would the police know who the assailant was in time to avoid shooting a teacher, for example? And what if … END_OF_DOCUMENT_TOKEN_TO_BE_REPLACED

Sens. Bernie Sanders and Elizabeth Warren on Tuesday unveiled a massive $146 billion “Marshall plan” for Puerto Rico with several other senators. The plan includes immediate relief for the island’s cash-strapped government, billions more for economic development and renewable energy and Medicaid and Medicare parity, a key priority for the island.

“More than two months after Hurricanes Irma and Maria struck Puerto Rico and the Virgin Islands, half of the people there—American citizens all—still have no electricity,” Sanders said at a press conference Tuesday morning.

The far-reaching legislation would grant $62 billion to the governments of Puerto Rico and the U.S. Virgin Islands, $27 billion to renovate infrastructure, and $13 billion in additional FEMA funding to rebuild the electric grid “with more modern, resilient technologies,” instead of the Stafford Act’s requirements that the grid be restored to its condition before the storms, according to a summary of the bill from Sanders’s office.

“The bill that Senator Sanders has introduced in the United States Congress is a comprehensive plan that provides the blueprint for the transformation of Puerto Rico,” Carmen Yulín Cruz, mayor of San Juan, Puerto Rico, said in a statement. “Senator Sanders also shows a great deal of respect and faith in us when claiming that the recovery or Puerto Rico must be in Puerto Rican hands.”

More news/video/etc. in the comments, including:

(Still fighting a bug in the comments, so if they do not load try clicking the ‘sort by newest/oldest’ option and they should pop-up)

‘Don’t interrupt me while I’m interrupting you!’: Ted Cruz and Bernie Sanders ribbed each other nonstop at CNN’s debate

The polarizing topic has been at the center of Capitol Hill, as lawmakers have attempted to reform the tax code. Republicans, in an effort to pass the tax code, have explored trying to pass tax reform without Democratic support; while Democrats have complained that they have been left out of a crucial, bipartisan process in governing.

Included in the GOP tax plan is a 20% corporate tax rate, the elimination of the estate tax, and the implementation of three tax brackets.

Cruz defended the plan, saying on CNN, “Republicans want to lower the taxes for each and every person watching this debate,” and said that lowering the corporate tax rate would allow businesses to create more jobs.

Sanders, however, said the GOP’s tax plan is about giving “tax breaks to people who don’t need it.” The senator said he supports “a tax cut for the middle class and working families.”

Throughout the evening, the two senators threw several verbal jabs at each other’s expense.

As you can read In the liveblog below, the Bernie vs Cruz buget debate went as one might expect. (Bernie knows what he’s talking about and articulates it, Cruz does very little of either) There’s plenty of quotes, and tweets and all that stuff you might enjoy, so you may want to go check it out. I’ll be posting reactions articles in the comments but just incase you missed it and have time to spare, here it is:

More progressive news/video/etc. in the comments including:

*Mnuchin Gives Away the Game: “It’s Very Hard Not to Give Tax Cuts to the Wealthy”
*Cash In: Sanders Leads Pack in Fundraising
*Bernie Sanders leads Joe Biden in 2020 New Hampshire poll
*Pruitt Threatens to ‘Purge’ Scientists Who Refuse to Be Fossil Fuel Puppets
*Why Are Incarcerated Women Battling California Wildfires for as Little as $1 a Day?
*Pipeline updates, Water Protector, Indigenous News & More

Just a quick post in case anyone wants to comment on the debate on the tax plan that just began. Cruz is making his opening statement and he jumped right in with a claim that Bernie wants us all to pay more in taxes.

END_OF_DOCUMENT_TOKEN_TO_BE_REPLACED 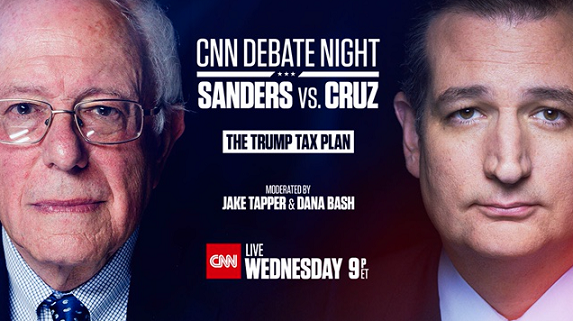 With attempts to repeal and replace Obamacare stalled, Republicans in Congress are now squarely focused on passing President Trump’s tax reform plan, and Sen. Cruz and Sen. Sanders will debate the best path forward on this critical issue.

Sanders and Cruz, runners-up for their respective presidential party nominations in 2016, will also field questions from voters around the country at the Town Hall Debate.

The Town Hall Debate will air on CNN, CNN en Español, CNN International, and will be carried by CNN’s SiriusXM Channel 116 and the Westwood One Radio Network.

In addition to the TV airings, the Town Hall Debate will also stream live for subscribers on Oct. 18 via CNNgo (at CNN.com/go and via CNNgo apps for Apple TV, Roku, Amazon Fire, Samsung Smart TV and Android TV) and on the CNN mobile apps for iOS and Android.

Just thought I’d announce this in a stand-alone post so you can a) mark your calendars b) discuss if there is a desire. Personally I like seeing Sanders take on as many Republicans as possible, and don’t think he will have any trouble holding his own here. Interesting that its always Sanders tackling these issues head on, on live, unscripted television. Guess the ‘real Democrats’ are busy at their fundraisers.