Good Morning Friends! Lots going on. Here’s a sampling. Things not going too well over at the Standing Rock protest site. In a massive show of force yesterday, twenty-one protestors, or ‘water protectors’, were arrested. At today's prayer service water protectors were surrounded by armed police so they could not leave. Police also impounded their vehicles. — Ruth H. Hopkins (Red Road Woman) (@Ruth_HHopkins) September 29, 2016 The pic on the left in this tweet of a man getting arrested really tugged at my heart due to the expression on his face. He has a kind of stolid expression that I find very … END_OF_DOCUMENT_TOKEN_TO_BE_REPLACED

Lambert Strether over at Naked Capitalism has an idea for keeping the pressure on the House of Representatives regarding the TTP. It’s a two part strategy: “The key [to preventing TPP from coming to a vote in the lame duck] is to get House Democrats on record before the election as opposing TPP, and then getting them to lobby the 28 Democrats who supported the “fast track” Trade Promotion Authority (TPA) to oppose a vote after the election. These 28 are: Terri Sewell (AL-07); Susan Davis (CA-53); Sam Farr (CA-20); Jim Costa (CA-16); Ami Bera (CA-07); Scott Peters (CA-52); Jared … END_OF_DOCUMENT_TOKEN_TO_BE_REPLACED

DemocracyNow! Interviews with Keith Ellison, Josh Fox and Shailene Woodley in regards to Sanders and the party platform:

END_OF_DOCUMENT_TOKEN_TO_BE_REPLACED

Via Politico: Sanders Threatens A Platform Fight Over TPP & Fracking Bernie Sanders has one big demand when the Democratic National Committee’s full platform committee meets in Orlando on Friday: Put the party on record as strongly opposing the Trans-Pacific Partnership. When the 187-member panel considers amendments to the draft platform hammered out by the 15-person drafting committee, Sanders’ allies will look to push a long list of policy tweaks: a carbon tax, a ban on fracking, and language promising to expand Medicare. Opposing the TPP — the sweeping 12-nation trade deal negotiated by the Obama administration — is the … END_OF_DOCUMENT_TOKEN_TO_BE_REPLACED

Senator Elizabeth Warren taped a You Tube video on behalf of CREDO to aid the fight agaisnt TPP. “We’re going to need your voices now more than ever,” Warren (D-Mass.) says at the end of the video, which was released by CREDO, a liberal activist group that is fighting the TPP and worked against trade promotion authority legislation last year. The Massachusetts senator said she was counting on the organization’s members “to help [her] fight to stop the TPP over the next few months.” snip “It’ll be open season on laws that make people safer but cut into corporate profits,” she says. … END_OF_DOCUMENT_TOKEN_TO_BE_REPLACED 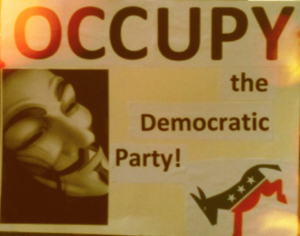 The Democratic Drafting Committee voted down a $15 an hour minimum wage and an Anti-TPP stand to be included in the platform during today’s session in St. Louis, MO. Clinton Delegates Vote Against Clinton Stands on Trade JUNE 24, 2016 Sanders Welcomes Platform Language on Banks, Capital Punishment SYRACUSE, N.Y. – U.S. Sen. Bernie Sanders said on Friday that he was “disappointed and dismayed” that allies of Hillary Clinton beat back Democratic Party platform proposals on trade. On the other hand, Sanders said he was pleased that the platform drafters adopted language calling for breaking up too-big-to-fail banks and enacting … END_OF_DOCUMENT_TOKEN_TO_BE_REPLACED