Last night, Republicans blocked my amendment to the #FY19NDAA that would stop the U.S. from refueling Saudi-led coalition jets bombing civilians in Yemen. They argued that our alliance with the Saudi monarchy meant we needed to overlook their war crimes in Yemen. I disagree. pic.twitter.com/jfTNfct1PF

For your reference, here is a list of all of the House Representatives, sorted by name.

Here is a list of off of the Members of the Armed Services Committee, sorted by party.

We need to do something to help Yemen. I very much appreciate Rep. Ro Khanna’s efforts on Yemen’s behalf.

TPWers, I just discovered on twitter that yesterday was Tulsi’s birthday! I wish I’d seen the message sooner–Jane Sanders posted the note. Happy Birthday my friend! Nice to see you spending it with Town Halls in Hawaii @TulsiGabbard I know you will bring their voices to D.C. — Jane O'Meara Sanders (@janeosanders) April 13, 2017

END_OF_DOCUMENT_TOKEN_TO_BE_REPLACED

Donald Trump’s feverish tweeting appears to be contagious. Amid a chorus of praise for the administration’s cruise missile strike on a Syrian airbase last week, Neera Tanden, the head of the Center for American Progress, dashed off a tweet calling on voters in Hawaii to oust Democratic Representative Tulsi Gabbard for expressing skepticism about the Syrian government’s responsibility for the chemical attack that provoked the US military strikes. Former presidential candidate and former Democratic National Committee chair Howard Dean piled on, and tweeted that Gabbard’s comments were a “disgrace” and that she “should not be in the Congress.”

Heree’s what Gabbard said: “This administration has acted recklessly without care or consideration of the dire consequences of the United States attack on Syria without waiting for the collection of evidence from the scene of the chemical poisoning.” Gabbard added she would support Assad’s prosecution and execution as a war criminal if the attacks were proven, though she still wouldn’t support military action. “A successful prosecution of Assad (at the International Criminal Court) will require collection of evidence from the scene of the incident, and I support the United Nation’s efforts in this regard. Without such evidence, a successful prosecution is impossible,” she said.

But Tanden and Dean apparently agreed with Trump’s quick conclusion that “There can be no dispute that Syria used banned chemical weapons.” So did much of the mainstream media and foreign policy establishment.

﻿An independent investigation is still needed, but surely Gabbard’s skepticism was not only defensible but laudable at a time when the media was blaring patriotic support for another military attack in the Middle East.

Gabbard isn’t going to lose her seat because of Tanden and Dean’s tweets. Her opposition to escalating the wars in the Middle East enjoys wide popular support. But the calls for her ouster are instructive in any case.

For all the urgent pleas for unity in the face of Trump, the party establishment has always made it clear that they mean unity under their banner. That’s why they mobilized to keep the leader of the Congressional Progressive Caucus, Representative Keith Ellison, from becoming head of the DNC. It’s why the knives are still out for Sanders and those who supported him. It’s why the DCCC still is loath to contribute resources and energy to populist challengers like James Thompson in Kansas, who threaten to build the Sanders/Warren wing of the party.

More on the failures of the DCCC/DNC, Sanders updates, Environmental News, and whatever else I happen to run across this morning will be in the comments. Have a great day!

Good morning all. I am super busy before the upcoming holiday break so I’ll keep the intro down to that hello and the usual reminder to new users who are experiencing problems to email me at the helpdesk address listed on the sidebar.

The first thing I have for you is Bernie speaking in Concord, and then the rest of the news will be in the comments.

Sanders returns to New Hampshire, vowing to fight for the working class

The two chairs set up for Bernie Sanders and event moderator Josh McElveen sat empty onstage for the first half hour of Sanders’s appearance on Monday at the Capitol Center for the Arts.

Instead, Sanders had resumed his familiar spot behind a lectern, with his signature glasses, wispy white hair and wild gesticulations as he talked about the need to take power away from big corporations and lobbyists and return it to the working class of America.

Sanders was in Concord to promote his new book Our Revolution but the event felt more like a subdued version of one of his presidential campaign rallies.

A year ago, Sanders himself was running for president – winning by a landslide in the New Hampshire primary before going on to run a competitive national race against Hillary Clinton.

The senator was a little-known entity in the early days of the primary, traveling between campaign town halls in a black sedan with Vermont license plates and a bumper sticker from an old senate campaign.

With a chuckle, Sanders remembered that one of his first campaign events was in Concord. A longtime staffer was driving him to the venue, when they realized they had screwed up the directions.

“We began the campaign pulling into the wrong town,” Sanders said, prompting a hearty laugh from the audience. “It was more or less uphill from there.” 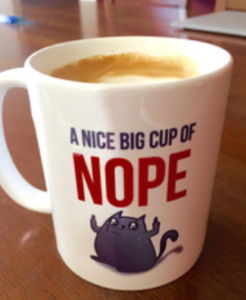 Just a quickie, and to practice posting here. Go Bernie! We are with you!