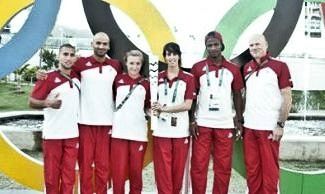 The goal of this trained dental assistant is to represent her country at the Olympic Games in Rio de Janeiro. “It is an honor for me to represent my country at the Olympic Games and be able to move in a positive light for Palestine. I hope that other young Palestinians also get to enjoy sports or even athletics. I think those who train hard and show willpower can come just as far as I did. I would be very happy if our team gets more members.”

Mayada was born in Berlin to a Palestinian father and a German mother, and has dual citizenship. She decided to compete for Palestine after the suggestion was made by an acquaintance of her father who works at the Palestinian Embassy in Berlin. “Palestine wants to build up a team for Rio.” she was told. 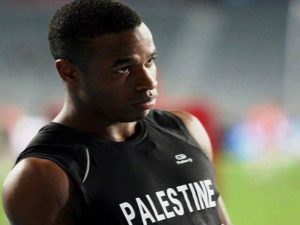 After Round 1, his standing was #69. He did not qualify for the Semi-finals.

According to the Palestinian media envoy to the Olympic committee, Abu Khousa said he was very happy with his accomplishment in the preliminaries. However, he expressed concern at the fact that he had pulled his hamstring during the preliminaries, saying that it would likely affect him during the coming round, which it appears to have done.

Six months before the 2014 Asian Games in Incheon, Republic of Korea, Mohammed left Palestine to train in Mauritius due to the grave situation in his homeland. 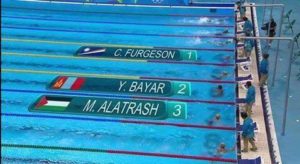 Al-Atrash said that despite not moving forward in the games, she was very happy to have broken her record of 29.91 seconds, and will continue improving her time.

Being from Bethlehem in the West Bank, Mary was invited to compete in the tournament by the Olympic Committee after meeting certain qualifications. “I am so happy. Representing Palestine in competitions is a dream for any Palestinian athlete, especially the Olympics,” Al-trash told Reuters. 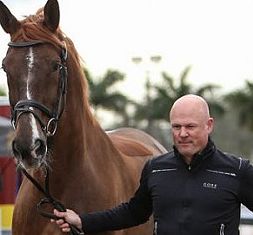 On a normal day, this German/Palestinian businessman gets up at 5:30 am, commutes to his stables and rides his horses. He then returns home before driving to the office of his family’s business, the multinational company Uniplan, where he sometimes works until 9:00 pm. “You hardly have a private life. I live in two worlds, at least. I ride four times a week, I go running twice, I do yoga every day. I work a lot, I ride a lot, but you pay a price. I hardly have any time for my friends and building relationships is not easy.” (eurodressage.com).

Zimmermann rode until age 26 before taking an 18-year break. He returned to the sport in 2006. (eurodressage.com)

Ahmed took up swimming at age five at the Al-Ahly club in Cairo. “My parents signed me up for classes, and I loved it,” he says.

His most memorable moment is competing for Palestine.  “Shoot for the moon,” Ahmed says. “Even if you miss, you’ll land among the stars.”  Ahmed swam in the 400-meter freestyle event at the 2012 Olympics in London, finishing in 27th place.

Ahmed was born to a Palestinian father and an Egyptian mother. His current occupation is athlete and he has a degree in Business Administration from the Autonomous University of Barcelona, Spain.

August 6, 2016:  Was eliminated by Walide Khyar of France in the Elimination Round of 64

When researching this, I discovered that NBCOlympics.com does not even show the video of this match. But I did learn that the sport is rather brutal and it’s allowed to be such under the rules.  For instance, an opponent is allowed to choke the competitor until the competitor blacks out completely.  They are also allowed to cause a dislocation in the elbow and face no consequences whatsoever because of this specific technique that causes large numbers of elbow dislocations intentionally.

No wonder Simon has had so many injuries over the past few years. In 2015, he sustained a broken rib and hand. He also suffered an injury to ligaments in his elbow and a pneumothorax (collapsed lung) in late 2013 which forced him to stop participating in the sport until mid-2014.

Simon began judo in 1995 in Leipzig, Germany. The Black belt is also a practicing physiotherapist. He was born and raised in Germany, and his father is Palestinian.

“Even though I fight for Palestine, I was born in Leipzig. My goal is to build a bridge between the two different cultures – fighting for Palestine on the mat, but also being a representative for Germany and the wonderful city of Leipzig,” he explains.

Well, to sum up, we are very proud of all the Palestinian athletes who represented in Rio. Thank you for all your hard work and dedication.