Skip to toolbar
↓
Home→Black Lives Matter→What is a fair wage for a prisoner’s labor? 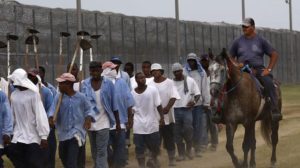 Prisoners at Angola Prison, LA. Angola is built on the site of a former slave labor camp (they were not “plantations”)

Samuel Sinyangwe visited Louisiana a few weeks ago, and wrote about how conscript labor is used there in the state legislature and across government facilities.

Some background: Louisiana has the highest incarceration rate in the *world.* Within that, black people are locked up at much higher rates. pic.twitter.com/Wcc85JCOwM

I thought I understood racism and mass incarceration. But nothing prepared me for what I saw in Baton Rouge, Louisiana. (1/x)

The thread is worth reading, and Sinyangwe was particularly affected by the sight of prisoners serving food, cleaning and laboring at the state capitol.

I didn't take pictures. But pictures are available online. Here are some. pic.twitter.com/Nzd9Wg67TR

Though it is sobering, none of this should come as a shock to any American. Shawshank Redemption was one of the biggest movies of the 1990s, and it explored, in exhaustive detail, the exploitative system of conscript labor. More recently, the documentary movie 13th covers the many forms of legal exploitation of prisoners embedded in our system of mass incarceration.

Nor should it come as a surprise to anyone with even the slightest familiarity with American history that the powers of the state have been used to exploit and steal labor from people of color, primarily black men. Yet, many of us sometimes fail to recognize what is staring directly at us.

Still can't get over this part of Hillary Clinton's book. h/t @JeanetteJing pic.twitter.com/R7MMXoODEg

We should also note that low wages for labor can, perversely, condemn people to years of imprisonment. Jimmy Carter (who as governor also had prisoners working for him) describes the damning case of a woman who was sentenced to 7 years or $750. She couldn’t come up with $750 and served 5 years till Carter discovered the circumstances and had her released:

I believe that unless you subscribe to a labor-centered ideology, unless you have the principle of a fair wage for labor engrained in you, it is easy to miss these injustices and accept arguments about cost control at face value.

There is an argument that having prisoners serve governors helps facilitate an eventual pardon. Governors in states like Georgia, Alabama, South Carolina and Arkansas do grant pardons regularly, often to prisoners who served them in the governor’s mansion, sometimes taking significant political heat for doing so. Yet, this so called “trusty” system, also has a tortured history that involves prisoner abuse and exploitation. It’s also true that, black people are pardoned at lower rates than others. And, as Governing magazine notes, pardons are becoming increasingly rare, while the theft of labor from prisoners continues.

Things have not gotten better in since the 1980s. In an article written in 2000, “Prison labor on the rise in US”, Alan Whyte and Jamie Baker write about the history of prison labor in the US.

The struggle over prison labor has a long history in the US. In the early 1800s, group workshops in prisons replaced solitary handicrafts, and the increased efficiency allowed prisons to be self-supporting. Entire prisons were leased out to private contractors, who literally worked hundreds of prisoners to death. Manufacturers who lost work to prison contractors opposed the leasing system, but only with the growth of the union movement came effective opposition to prison labor. One of the most famous clashes, the Coal Creek Rebellion of 1891, took place when the Tennessee Coal, Iron and Railroad locked out their workers and replaced them with convicts. The miners stormed the prison and freed 400 prisoners, and when the company filled up work with more prisoners, the miners burned the prison down.

The prison leasing system was disbanded in Tennessee shortly thereafter, but remained in many states until the rise of the CIO and industrial unionism in the 1930s. As a result of this mass movement of workers, Congress passed the 1935 Ashurst-Sumners Act, making it illegal to transport prison-made goods across state lines. However, under the presidency of Democrat Jimmy Carter, Congress passed the Justice System Improvement Act of 1979, which granted exemptions from Ashurst-Sumners for seven “Prison Industry Enhancement” pilot projects. Congress has since granted exemptions to all 50 state prison systems.

More recently, during the general election campaign last year, prisoners went on strike nationwide. Shamefully, our mass media expended hours of TV coverage on typos and gaffes but spent almost no time covering this country-wide strike which touched the lives of millions of our fellow citizens.

The nationwide prison strike that began September 9 has largely wound down. Inmates have returned to work, though some smaller hunger strikes are still taking place. It’s unclear what long-term changes the strike may bring. Yet the protest, timed to coincide with the 45th anniversary of the Attica prison uprising, has made waves: An estimated 24,000 inmates missed work and as many as 29 prisons were affected, according to activists.

It’s also brought renewed attention to our prison labor system. About 700,000 of America’s 1.5 million prison inmates have jobs, and they work for as little as 12 to 40 cents an hour with few workplace protections. “It’s utterly exploitative,” says Heather Ann Thompson, a professor of Afroamerican and African studies and history at the University of Michigan and the author of the new book Blood in the Water: The Attica Prison Uprising of 1971 and Its Legacy. “Some farms in Nevada are paying 8 cents a day. Some jail workers are paid nothing.” Thompson, who has extensively studied prison labor, says prisoners are expected to work more than they have at any time since the Civil War, when prisons leased out convicts to private companies.

The hollowing-out of organized American labor has left unions unable to address the many injustices associated with prison labor in a meaningful way. However, prisoners have organized themselves at periodic intervals and demanded their labor be compensated at a fair rate:

In the late 19th and early 20th centuries, prison labor was largely regulated or prohibited, due in part to efforts by labor unions to prevent competition with low-paid inmates. But beginning in the 1970s, as the prison population began to rise, businesses lobbied to gut these regulations, says Thompson. In 1979, Congress created a program that gives incentives to private companies to use prison labor. Currently, the federal prison industries program produces items ranging from mattresses to prescription eyewear. Some inmates are employed as call center operators (“It’s the best kept secret in outsourcing!” says the program’s website.) Last year, federal inmates helped bring in nearly $472 million in net sales—but only 5 percent of that revenue went to pay inmates. […]

Heather Thompson: It’s absolutely fair to characterize it as slave labor, since constitutionally that is the only exception made for keeping people in a state of slavery.

That last line should settle the controversy over whether prison labor can be called slave labor. It is treated as such in our constitution. A good rule of thumb is that if you can call it “slave labor” when it happens in China, you should call it slave labor in the US as well.

Vice documented the varied work that prisoners are conscripted to do in the US, including fire-fighting, call centers, rodeo clowning, and yes, picking cotton. On that last note, let’s go back to Louisiana for more on the jarring image that leads this diary.

Crops stretch to the horizon. Black bodies pepper the landscape, hunched over as they work the fields. Officers on horseback, armed, oversee the workers.

To the untrained eye, the scenes in Angola for Life: Rehabilitation and Reform Inside the Louisiana State Penitentiary, an Atlantic documentary filmed on an old Southern slave-plantation-turned-prison, could have been shot 150 years ago. The imagery haunts, and the stench of slavery and racial oppression lingers through the 13 minutes of footage. […]

But there is a second storyline running alongside the first, which raises disquieting questions about how America treats those on the inside as less than fully human. Those troubling opening scenes of the documentary offer visual proof of a truth that America has worked hard to ignore: In a sense, slavery never ended at Angola; it was reinvented. […]

Some viewers of the video might be surprised to learn that inmates at Angola, once cleared by the prison doctor, can be forced to work under threat of punishment as severe as solitary confinement.

There’s a phrase here which is important, “less than fully human”.

Before you can get most people to blindly accept an injustice, you have to dehumanize the victims. We do this consistently with our never-ending wars. We have also been doing it with convicted prisoners.

Here again, ideology can help us avoid falling into such traps and become unwitting instruments of oppression. An ideology that focuses on the shared humanity of all can help us avoid becoming the kind of person who will be swayed by a single “feel good” story:

SILICON VALLEY mavens seldom stumble into San Quentin, a notorious Californian prison. But when Chris Redlitz, a venture capitalist, visited seven years ago, he found that many of the inmates were keen and savvy businessmen. The trip spurred him to create The Last Mile, a charity that teaches San Quentin inmates how to start businesses and code websites, for which they can earn up to $17 an hour. One of the first people it helped was Tulio Cardozo, who served a five-year sentence after a botched attempt at cooking hashish, which also left him with severe burns across half his body. Two years after he was released, he got a job as a lead developer in a San Francisco startup.

Such redemptive stories are the model for what the prison system could be. But they are exceptions—the rule is much drearier.

Action:
I would urge all of us to take these steps.

Excellent post. What I don’t know is how much of a profit is made due to free labor in corporate-owned, but federally contracted prisons, which will continue to rise since the Trump Administration already has indicated they will contract out more to private enterprise.

If you ask me $15/hr would be reasonable. It might be a disincentive for ‘The Prison Industrial Complex” to stop looking for new ways to incarcerate people.

Thank you so much for this essay. So disturbing but so important. It’s been hiding in plain sight for too long. Thanks again for shining a light on it.