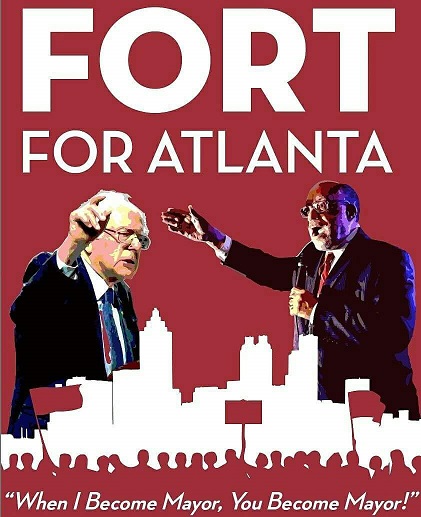 Vincent Fort Angered Democratic Elites When He Endorsed Bernie Sanders. Can He Be Atlanta’s Next Mayor?

On a recent Saturday afternoon in Atlanta’s East Lake neighborhood, Vincent Fort was out working the voters. As the populist wing of the Democratic Party has surged in recent months, it has created an unusual problem for a politician like Fort. Accustomed to being on the outer edge of the party, he now sounds like pretty much everybody else.

Or, as he puts it to one voter, everybody else now sounds like him.

“They want to deal with gentrification and all that,” he says of his opponents, “but they haven’t done it until the epiphany of the last six months.”

Fort, who served as the Democratic whip in Georgia’s state Senate until he resigned to run for mayor, has been a fixture of populist politics in the state for two decades. While politics in Georgia have swung from left to right, Fort served as the rare example of a politician who stuck by his guns, in good times and bad.

Ben Speight, the organizing director of Teamsters Local 728, says endorsing Fort’s bid was a no-brainer for the union. “This is about a guy literally walking the walk, viewing his role as a state senator as a way of amplifying movements,” he observes.

For years, that form of movement politics made Fort a lone voice in the wilderness. But, with radical municipal politics rising in neighboring Jackson, Mississippi and Birmingham, Alabama, there’s a chance that his moment has finally arrived.

The city of Atlanta took a big step Tuesday toward decriminalizing marijuana possession. The city council’s public safety committee approved the bill. The measure goes to the full city council

The law would only apply in the city limits – and conflicts with a state law that calls for jail time. If it passes, it will give police a lot of leeway as to which law – state or city – would be enforced.

Eight states plus the District of Columbia have legalized marijuana possession. It wouldn’t be legal in Atlanta, but its possession would only carry a maximum $75 fine under the proposed ordinance.

“Court costs, the jail time, ruining young peoples lives, they lose their scholarships, it breaks up families, and it wastes our tax dollars. That’s the reason for doing this,” said Kwanza Hall, a city councilman and candidate for mayor. Hall introduced his bill after another mayoral candidate, former Sen. Vincent Fort, made decriminalization part of his platform.

Senator Fort has consistently been a powerful progressive voice in the fight for economic equality that promotes a living wage, expands healthcare for everyone, and protects the environment. He is nationally recognized as a leader in the fight against predatory lending practices and foreclosures after authoring model legislation in 2001. Senator Fort has been on the forefront in the movement to protect public education and was responsible for securing $40 Million in funding for buildings at Atlanta Technical College and Atlanta Metropolitan College. His unwavering dedication to progressive values has earned him recognition from the NAACP, the AARP, and the Anti-Defamation League.

Fort was the first author of Georgia’s predatory lending law, which, until replaced by a measure written by Congressman Tom Price, was the strongest law in the country.[citation needed] He has sponsored and co-sponsored bills against prostitution, hate crimes, drug-related nuisances, discrimination against citizens with disabilities, racial profiling, disabled access to housing, and collective bargaining for law enforcement officers.[when?][citation needed] Fort has been described as a supporter of Grady Memorial Hospital.[4]

In February 2010, Fort opposed a bill that would prevent Georgians from being forced to receive a microchip implant against their will, calling it “a solution in search of a problem.”[5] On October 26, 2011, Senator Fort was arrested along with 52 other members of Occupy Atlanta, in support of the protesters.[6] In the aftermath of the 2014 shooting of Michael Brown in Ferguson, Missouri, Fort criticized police militarization in Georgia.[7]

In February 2016, Fort announced he would relinquish his support for Hillary Clinton and support Bernie Sanders for President of the United States instead.[8] He issued a statement saying, “After months of looking at Bernie’s record and studying his positions on healthcare, Wall Street, predatory lending and the minimum wage, I came to the conclusion that Bernie’s position on the issues that affect my constituents in Georgia the most conform most closely to my positions