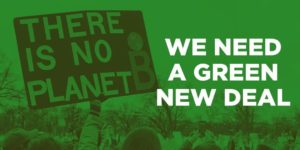 Every single senator running for President is co-sponsoring this legislation. More importantly, the measure is overwhelmingly popular among voters. And when I say overwhelmingly, I’m not kidding:

The survey conducted by the Yale Program on Climate Communication and the George Mason University Center for Climate Change Communication found that 92 percent of Democrats and 64 percent of Republicans back the Green New Deal plan. — thehill.com/…

Read that again, 92% of Democrats support the Green New Deal. 64% of Republicans support it. Survey respondents were given a brief synopsis of the GND and asked whether they supported it.

Some members of Congress are proposing a “Green New Deal” for the U.S. They say that a Green New Deal will produce jobs and strengthen America’s economy by accelerating the transition from fossil fuels to clean, renewable energy. The Deal would generate 100% of the nation’s electricity from clean, renewable sources within the next 10 years; upgrade the nation’s energy grid, buildings, and transportation infrastructure; increase energy efficiency; invest in green technology research and development; and provide training for jobs in the new green economy.  — climatecommunication.yale.edu/…

Which leads to the question, why is Sen. Diane Feinstein proposing legislation that is virtually guaranteed to divide Democrats when S.Res. 59 comes up for a vote? Also, why is she offering a proposal universally considered weaker than the GND, when the GND has enormous public support?

the Feinstein resolution promotes a grab bag of some (not all) of Obama's executive orders: return to Paris, energy efficiency, more.

It’s not even everything the Obama administration instituted via executive orders! It’s kind of going backwards. It is really weaker than the GND, let me use one small example. Here’s the GND:

(3) The United States shall ensure a just and equitable transition for all communities, including by: […]

(D) respecting the needs and wisdom of local communities in planning infrastructure changes, especially communities that have historically been marginalized or oppressed, including indigenous peoples, communities of color, migrant communities, deindustrialized communities, depopulated rural communities, the poor, low-income workers, women, the elderly, the unhoused, people with disabilities, and youth — www.feinstein.senate.gov/…

There’s an enormous difference between “respect the needs and wisdom of” and “obtaining the free, prior, and informed consent of”. The first is a relatively content-free platitude, the second is a concrete requirement. There are several other examples. Sen. Feinstein’s proposal does not talk about union labor, the GND does. The GND requires a full-scale mobilization effort over ten years. Sen Feinstein’s proposal has softer targets over 30 years. The GND proposes a high speed rail network and public transit, to reduce reliance on air and car travel, Sen. Feinstein’s proposal does not. Don’t take my word for it, please read them side by side and ask yourself why anyone would want to squander the enormous political momentum GND activists have built (81% of voters support them!) by offering up a weaker version.

That twitter thread is worth reading in full (h/t MB). But here’s the critical bit for the purpose of this discussion. Mitch McConnell intends to present S.Res. 59 up for a vote, in an attempt to divide Democrats.

Some of us have been urging Senate Dems to not give in to McConnell; not promote a "Dems in Disarray" narrative; not be splintered. #DiFiGND

Forget the video for a bit. It was a remarkably effective piece of activism, but t is not worth discussing further. Let’s talk about policy and what actually needs to be done here.

Why does Sen. Feinstein think her proposal is better than S.Res.59?

Why does she think offering it up in the Senate is going to result in more tangible progress than throwing her back behind the resolution proposed by Sen. Markey in the Senate?

Perhaps  Sen. Feinstein has reached a secret deal with Mitch McConnell. She believes her resolution will pass with strong Republican support. If so, that would be great progress under a Republican administration and Senate. I would welcome it.

If however, Sen. Feinstein does not have such an agreement, then as RL Miller notes, her alternative proposal merely serves to divide Senate Democrats on this issue. What then is the point of the proposal? Why offer a divisive proposal when the one on the table has 92% support among Democrats?

I’m genuinely curious as to what Sen. Feinstein is thinking with her alternate proposal.

At her age and with her money she obviously does not give a damn about the impact of climate change.

Her past policy actions has never been truly progressive. Why change now?

Thanks for this. It’s amazing (or very sad) to me that she has so much support over there. She is not going to escape the optics of her encounter with the kids. Spin spin spin not going to work. She exposed her true self and it was ugly.

On behalf of the dozen organizations active in the No Fossil Fuel Money coalition, representing millions of supporters, we write to demand that you live up to your pledge to “prioritize the health of our families, climate, and democracy over fossil fuel industry profits.”

On February 24, 2018, you signed the No Fossil Fuel Money Pledge in person at the California Democratic Party’s Environmental Caucus meeting in San Diego, California.

The No Fossil Fuel Money Pledge, as you know, states the following: “I pledge to not take contributions from the oil, gas, and coal industry and instead prioritize the health of our families, climate, and democracy over fossil fuel industry profits.”

As articulated on the website, “[t]aking the pledge means that a politician or candidate’s campaign will adopt a policy to not knowingly accept any contributions over $200 from the PACs, executives, or front groups of fossil fuel companies — companies whose primary business is the extraction, processing, distribution, or sale of oil, gas, or coal.”

We’ve recently learned that during your 2018 Senatorial campaign, after signing the No Fossil Fuel Money Pledge, you accepted at least two major contributions that are in clear violation of this pledge:

We demand that you immediately return these funds and any other funds received by your campaign that violate the pledge you signed on February 24, 2018. Failure to provide proof of the return of these funds by close of business Friday, March 1 will result in your removal from our listing of No Fossil Fuel Money Pledge signers.

Further, we stand in solidarity with the young constituents who visited your office today to request your support for the Green New Deal resolution. We believe your response to their respectful request was unbecoming of a climate champion and we urge you to reconsider your position, and to issue an apology to the youth who spoke with you.

Should you wish to speak further on this matter, please contact us as follows:

Notice the last name in the blockquote.

This is a repeat of a snarky tweet that I posted earlier today.

sorry. too busy. canvasing for dianne feinstein. have to knock on all the doors of kids in my neighborhood and tell them 'fuck you'

T and R, subir!! Good seeing you here. I follow over at TOP, too. 🙂 DiFi is a relic who needs to retire. She’s in her 80s, and starting to show signs of senility. A Futurist, she ain’t.

The common dominator for Feinstein, McConnell, lobbyists and I’ll throw in Pelosi

This proposal both serves to green-wash some of her recent PR missteps, and to muddy the water regarding the popular real GND.

And as with others, I am very pleased to see you posting here @subir!

I used to regularly, just been lazy lately. Am fixing that.