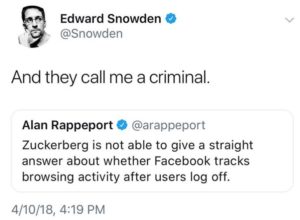 WASHINGTON — Facebook CEO Mark Zuckerberg got into an awkward exchange with a top Democratic senator on Tuesday when the lawmaker began probing him about his own personal privacy.

During the blockbuster hearing on Capitol Hill, Sen. Dick Durbin asked Zuckerberg, “Would you be comfortable sharing with us the name of the hotel you stayed in last night?”

“Um,” Zuckerberg said before a long pause. “No.”

The audience and panel of senators erupted in laughter at Zuckerberg’s hesitancy to answer questions about his personal activities. But Durbin used the situation to make a point about personal privacy, which was the focus of the joint hearing between the Senate’s Judiciary and Commerce committees.

“If you messaged anybody this week, would you share with us the names of the people you’ve messaged?” Durbin asked.”Senator, no, I would probably not choose to do that publicly here,” Zuckerberg responded.

The questioners are getting slammed, in general, about their apparent lack of knowledge about Facebook’s technology:

If anything the #Zuckerberg testimony has shown the technical incompetence of our legislators and how big the gulf is between politics, law, society and the tech-determined future. Scary! No wonder GenZ wants to matcha!

But Zuck sounds like he could use a primer too?

Zuckerberg DOESN'T KNOW how his company's products are linked.

I repeat: ZUCKERBERG DOES NOT KNOW HOW HIS COMPANY'S PRODUCTS WORK.

Could it be that * GASP * Zuckerberg might be lying?!

The hearings are still ongoing, I just thought I’d start a thread.

Zuck: Yeah so if you ever need info about anyone at Harvard

[Redacted Friend’s Name]: What? How’d you manage that one?

Zuck: They “trust me”

Once we are done with #Zuckerberg can we have public hearings on the NSA?

Well, Bernie does think this is sort of important. He posted this tweet about an hour ago:

Mark Zuckerberg testified today about Facebook’s role in our democracy. Here are the most important questions we should ask concerning his testimony: pic.twitter.com/kiBDbZ1CmK

Great article about the hearings and the refusal of legislators to do their job.

THE SENATE IS AFRAID TO GOVERN. THAT’S GREAT NEWS FOR FACEBOOK.

Did Lyin’ Ted really ask whether or not Chick-fil-a was not treated well on FB? If this is all he does to try to reach out to the base to win his re-election, this is SAD!

“There are a great many Americans who I think are deeply concerned that Facebook and other tech companies are engaged in a pervasive pattern of bias and political censorship,” Cruz told Zuckerberg during a joint hearing of the Senate Judiciary and Commerce committees.

“There have been numerous instances with Facebook,” he continued, before listing a few, starting with a 2016 Gizmodo report that former Facebook employees claimed the website’s “trending” sidebar had suppressed conservative-leaning stories.

“In addition to that,” Cruz continued, “Facebook has initially shut down the Chick-fil-A appreciation day page, has blocked a post of a Fox News reporter, has blocked over two dozen Catholic pages and most recently blocked Trump supporters Diamond and Silk’s page, with 1.2 million Facebook followers, after determining their content and brand were, quote, ‘unsafe to the community.’ To a great many Americans that appears to be a pervasive pattern of political bias.”

Zuckerberg didn’t answer for the individual examples Cruz gave — TPM was unable to immediately verify them, save for Diamond and Silk’s well-reported claim, though they were not blocked — but said he was similarly concerned about ensuring that Facebook didn’t represent a political bias. Cruz interrupted him, asking if the website had blocked posts from a list of progressive organizations. Zuckerberg said he wasn’t aware.

I presume Lyin’ Ted gets donations from Chick-fil-A.

Ah shit, lol, yes, that’s all that matters, whether or not Chick-fil-A can broadcast their promotions. (omigod)

(Posted this in LD’s thread as well, mostly by accident, lol, as I was over there posting something related to gas pipelines, and there’s a lot going on in my background rn)

Wow, check out this video from Bernie:

Mark Zuckerberg testified today about Facebook’s role in our democracy. Here are the most important questions we should ask concerning his testimony: pic.twitter.com/kiBDbZ1CmK

And i agree, hypocrites who vote for more surveillance–noting Kennedy, Whitehouse, Klobuchar especially on this panel. But it looks great to the public and that’s what really counts.

I was going to post a topic for today 4/11. It was on Paul Ryan stepping down. But I can’t figure out the cyber steps, oh well. T and R to the usual gang of suspects!!

Looks like LieparDestin is extra busy today (at least I hope that’s what it is, as opposed to feeling unwell today, for example).

So I think I’ll start a thread. Did you hear that some of Ryan’s colleagues shed a tear for him. I’m not sure how many of his constituents will be doing that though!

But what worries me he will try to take Medicare and SS with him as he leaves. He can do a lot of damage in 6 months.